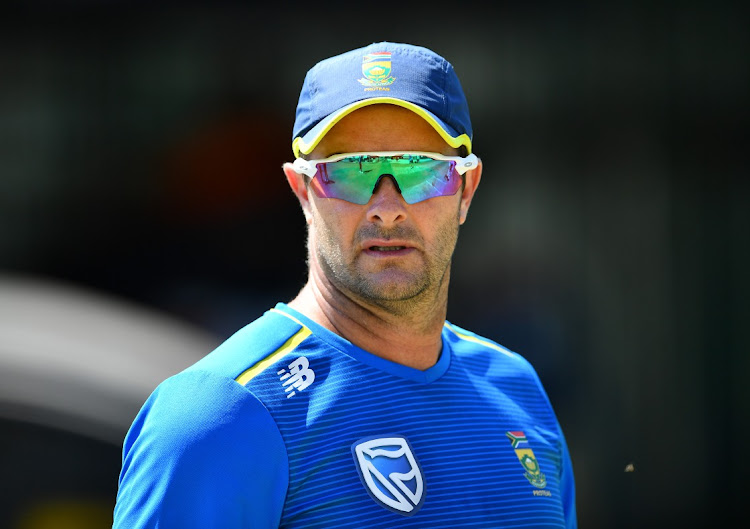 The SJN Hearings Report concludes that the process to appoint Mark Boucher as head coach of the Proteas was flawed.
Image: Ashley Vlotman/Gallo Images/Getty Images

The highly anticipated report on Social Justice and Nation Building (SJN) in cricket by ombudsman advocate Dumisa Ntsebeza has found that the appointments of Graeme Smith and Mark Boucher at Cricket SA (CSA) were flawed.

Smith was appointed as CSA's director of cricket  in 2020 for a two-year period ending in March 2022, while Boucher was appointed Proteas coach in 2019.

In the report, which also found that former captain AB de Villiers engaged in prejudicial conduct, advocate Ntsebeza said the appointments of Smith and Boucher were flawed from a procedural perspective.

The report came down hard on Smith for not following CSA’s human resource (HR) policies when he hired Boucher with no Level 4 coaching qualification, and with no interviews conducted.

“Mr Smith does not explain how he arrived at the decision of appointing Mr Boucher,” read one of the takeaways from the 235-page report.

“There is no mention whatsoever of the CSA HR Manual having been applied by Mr Smith and CSA in the appointment of Mr Boucher and other appointments made during that period in question.

“At paragraph 65 (301), Mr Smith highlights Mr Boucher success [in] cricket during the latter’s playing days, he does not venture at all to explain the process he followed in appointing Mr Boucher ahead of Enoch Nkwe, who was at that time an interim head coach of the Proteas.

“That he was not told or advised by the CSA Board, CEO etc to comply with the HR manual when making appointments does not absolve Mr Smith from his responsibility as a senior employee of CSA at the time to comply with its provisions.

“Mr Smith needs to understand that he was handsomely remunerated for his position and professed to possess all the attributes for the position in question, one such attribute is familiarity with governance controls in the organisation.

“That the board did not stop him does not render his conduct regular and excusable.”

On Smith, the report concluded that his appointment was irregular, irrational and unfair, and the interview process was a sham.

CSA chairperson Lawson Naidoo said they were engaging the report and would comment later.

“The board is engaging with the report and going through it in detail. We have made it clear from the very beginning that we support this process because it is a critical process to help us take SA cricket forward.

“We will be engaging with the report and once we have done so holistically we will then publicly comment on what steps we are going to take,” said Naidoo.

The ugly side behind AB’s jaw-dropping shots

Worshipped for his talent, he left a complicated legacy
Sport
8 months ago

"Witness the thousands of violent clashes at Wembley recently where England players took the knee, But momentum must not be lost to keep doing the ...
Opinion & Analysis
9 months ago