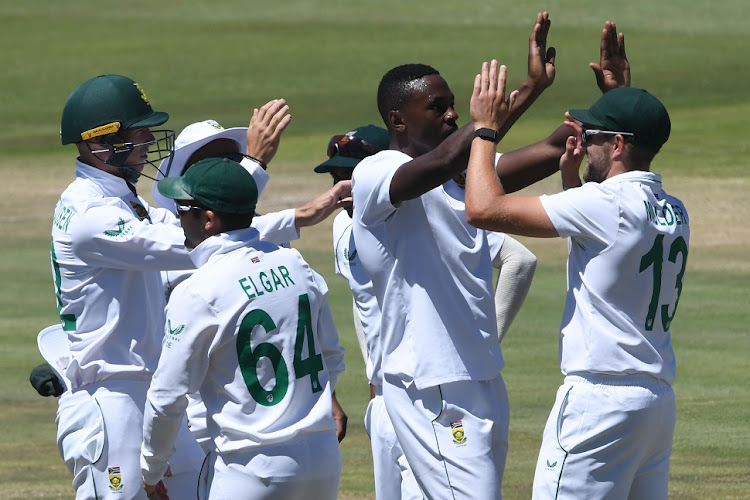 Kagiso Rabada of the Proteas celebrates the wicket of Shardul Thakur of India on day 4 of the first Test at SuperSport Park in Centurion on December 29 2021.
Image: Lee Warren/Gallo Images

A defiant Kagiso Rabada has insisted that the Proteas are still alive in this Boxing Day Test despite India needing six wickets to win on the final day on Thursday.

At stumps on Wednesday, SA had been reduced to 94/4 in their chase of 305 with Aiden Markram (1), Keegan Petersen (17), Rassie van der Dussen (11) and nightwatchman Keshav Maharaj (8) already back in the change rooms.

The Proteas resume on Thursday morning with Dean Elgar, who registered his 18th half-century on 52, to be joined by Temba Bavuma who did not take the field as Maharaj’s wicket fell from the last ball of the day.

The destroyer in chief of the Proteas, who are still behind by 211 runs, was Jasprit Bumrah with the wickets of Van der Dussen and Maharaj. Mohammed Shami and Mohammed Siraj accounted for Markram and Petersen respectively.

“Definitely, we still have to show belief,” was Rabada’s reply when asked about SA’s chances despite being on the ropes.

“We will strategise overnight and work out how we want to approach this. We have to believe — every sportsman has to believe that they can win from any position, you need that belief.”

The last day is expected to be disrupted by scattered thunderstorms, similar to what washed out play on Monday, and Rabada said the Proteas will focus on what they can control.

“There have been chats on when it’s going to rain and when it’s not going to rain but at the same time it is an uncontrollable. We have to think of coming out and playing a full day of cricket.

“We have to strategise on how we want to approach the day so that we can put ourselves in the best position possible.”

India are closing in on victory against SA in the Boxing Day Test at SuperSport Park in Centurion.
Sport
6 months ago

The Proteas have struggled against the Indian pace attack of Bumrah, Shami, Siraj and Shardul Thakur who have accounted for the 14 SA wickets that have fallen so far.

“They have some quality bowlers — Shami and Bumrah are quite experienced and Siraj has been bowling well for them for some time now. They have pace and skill and they are showing why they are a good attack,” Rabada said.

The Proteas’ bowling attack started with debutant Marco Jansen and the lanky quick, who has taken five wickets in this match, has impressed Rabada.

“He is a phenomenal talent as we have all now seen. He is an awkward customer to face because he is tall, he’s got pace and he can swing the ball as well.

“Against him you are up against swing, bounce and pace coming at you. In the second innings he justified his selection — he seems like he wants to learn, he is a hard worker and the rest is up to him to decide. But he is really keen on doing well for this team and for himself.”

SA have been set an imposing target of 305 by India to win the Boxing Day Test at SuperSport Park in Centurion.
Sport
6 months ago

India increase lead to over 200 with seven wickets in hand

India added 63 runs to their overnight score and increased their second innings lead over SA to 209 before lunch of day four of the Boxing Day Test ...
Sport
6 months ago

After two completed days of Test cricket, India have maintained the upper hand over hosts SA in this intriguing Boxing Day Test that is unfolding at ...
Sport
6 months ago