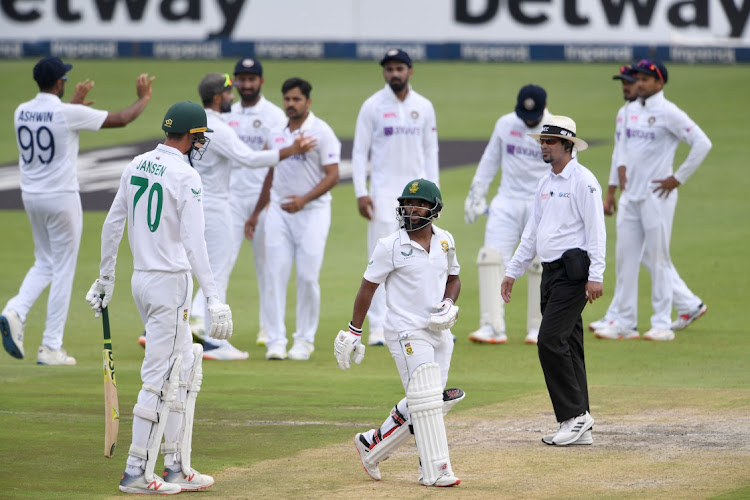 Indian players celebrate the dismissal of South Africa's Temba Bavuma during day two of the 2nd Test at the Wanderers Stadium on Tuesday.
Image: Lee Warren

The Proteas batted past tea at the Wanderers to reach 229 all out and a slender 27-run lead.

Temba Bavuma notched up a half century, while Keshav Maharaj (21) and Marco Jansen (21) ensured the South Africans could match India's score and then edge ahead.

The Proteas started after lunch with Temba Bavuma (51) and Kyle Verreynne (21) without scoring and still trailing by 100 runs. The two went on to put together a strong partnership of 60 off 122.

Their stand was broken when Verreynne was trapped in front by the by impressive Thakur, who claimed his fourth wicket of the day and the South African middle order started to crumble.

Bavuma went on to register his 17th Test half-century but was needlessly dismissed the following ball when he was caught by Pant off the bowling of Thakur.

Shami joined the party as Kagiso Rabada was caught by Mohammed Siraj at mid-on without scoring.

Keegan Petersen registered his maiden Test half-century but SA went to lunch under the pump following the loss of three top order batters before ...
Sport
2 weeks ago

Maharaj can turn things around

Keshav Maharaj's influence against India has been negligible, at best.
Sport
2 weeks ago

‘I believe I have a role to play in SA': ex-Proteas captain AB de Villiers

Former Proteas captain AB de Villiers may be unsure of his immediate future but believes he has a role to play in SA cricket.
Sport
2 weeks ago

Bangladesh looked to be closing in on a shock victory over world test champions New Zealand after Ebadot Hossain's three-wicket burst in the final ...
Sport
2 weeks ago