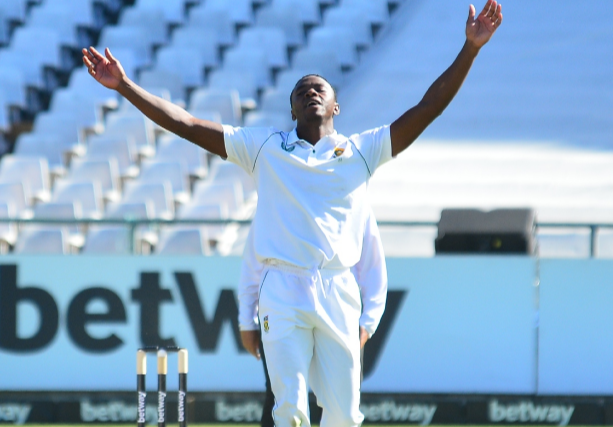 Kagiso Rabada celebrates the wicket of Virat Kohli on day one of the third Test against India at Newlands on Tuesday.
Image: Grant Pitcher/Gallo Images

The desire to stand up to and counter the genius of India captain Virat Kohli helped spur on Kagiso Rabada as he led the way for the SA attack on the first day of the third and deciding Test at Newlands on Tuesday.

Rabada bagged 4/73 as India were bundled out for a sub-par 223 in their first innings before the hosts replied with 17/1 by stumps.

It was Rabada who again set the benchmark for the SA attack after India won the toss and decided to bat in overcast conditions that cleared by mid-afternoon.

While India were never allowed to build meaningful partnerships, Kohli remained the one constant as he denied the Proteas in his 201-ball vigil at the crease.

Having failed to score a ton in his last 25 innings, Kohli strode to the middle on Tuesday determined to turn back the clock. Extreme patience and vigilance were the hallmarks of his innings as he sought to frustrate the SA attack.

Determined to occupy the crease, he was particularly judicious in the manner he left deliveries outside off-stump. Acute awareness of where he was in relation to his off-stump proved a vital ally as Kohli tried to stay out of trouble.

This of course made Rabada more determined to win his personal battle against one of the game's decorated and celebrated batters.

“He is a good player. You want to measure yourself against the best in the world,” Rabada said.

The SA pace ace ultimately prevailed when he had Kohli caught behind, ironically to a shot that wasn't in his playbook all day. Running out of partners, Kohli, then on 79, played uncharacteristically away from his body and offered a simple chance to wicketkeeper Kyle Verreynne.

“The plan was to bowl a good line and length,” said Rabada.

“I was trying to get the ball to swing away and not really go for the pads.

“It was pretty obvious and that's where he has been getting out. I think that's why he was very patient in leaving balls and that's why we tried to stick it. He batted extremely well and well done to him.”

SA will resume their first innings on Wednesday with Aiden Markram and night watchman Keshav Maharaj.

SA have opted for an unchanged line-up for the third and deciding Test against India at Newlands on Tuesday.
Sport
1 week ago

Bowling all-rounder Chris Morris announced his retirement from cricket on Tuesday, calling time on a career which saw him represent SA 69 times ...
Sport
1 week ago

EDITORIAL | Let fans into stadiums. There’s no reason not to

SA supporters are longing to watch live sport, but authorities are stopping them from doing so. This must change
Opinion & Analysis
1 week ago