Markram leaves without making a mark before SA steady the ship 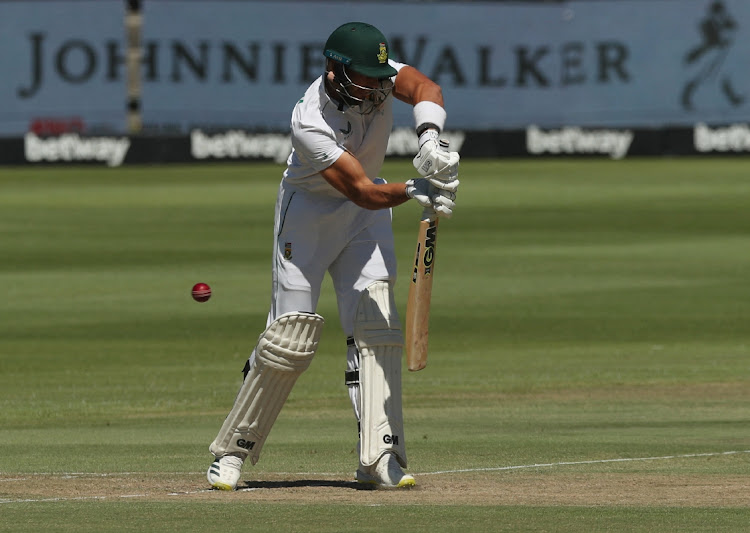 Aiden Markram during his brief stint at the crease in SA's first innings at Newlands.
Image: SUMAYA HISHAM

The day started disastrously for SA when they lost another opener and their night watchman on the second day of the final Test against India here at Newlands on Wednesday.

SA resumed their first innings on 17/1 having seen captain Dean Elgar depart late on the opening day and had reached 100/3 at lunch with Keegan Petersen (40 not out) and Rassie van der Dussen (17 not out) steering them to calmer waters.

However, they started the day on a poor footing. Aiden Markram edged the first delivery of the day just short of gully but Jasprit Bumrah's second ball had far more devastating consequences.

The opener, who is developing a history of questionable judgment when leaving deliveries outside off stump, was again castled by a ball that admittedly nipped back appreciably.

Markram dragged his dejected frame from the field, no doubt aware that his latest action, or inaction, would provide more fodder to the debate about his Test credentials.

Irrepresible India captain Virat Kohli has declared himself “absolutely fit” to play in the third and final Test against SA at Newlands starting on ...
Sport
6 days ago

He has been leaving with all the conviction of a Brexiteer, but it only in part explains a scoring sequence of 0, 4, 13, 1, 7, 31 and 8 in his most recent Test innings.

Unlike Virat Kohli, who on day one delivered a master class in leaving deliveries he felt did not require intervention, Markram needs to recalibrate.

Freeze-frame images have emerged that suggest the opener had adjusted his guard from off stump to middle, which may have been his way of negating the threat of being trapped LBW.

His Test average has slumped, but is still a respectable 37.52. But he needs an innings of substance to restore belief, most importantly in himself.

Technical deficiencies are there to be identified and ironed out. Confidence, however, is a commodity that comes through the repetition of good practices.

Bumrah, of course, is a master practitioner at identifying weaknesses and exposing them ruthlessly.

He teased and tormented the SA batters and rarely did the ball meet the middle of the bat when he delivered it from the Kelvin End.

He at times made the wicket appear treacherous.

Keshav Maharaj, meanwhile, lived a charmed existence but middled enough deliveries to be top scorer on the SA batting card for much of the morning.

Maharaj rarely gets bogged down and his unshackled approach helped him reach 25 before his number was up. The night watchman left the gate open and was bowled between bat and pad by Umesh Yadav.

For the second time in the morning session the bails took abrupt flight, sending India into rapture. With SA on 45/3, India's 223 looked sub-par no more.

Petersen and Van der Dussen quietly went about restoring the innings. While Van der Dussen was typically crafty in pushing and prodding the ball into gaps to rotate the strike, Petersen unleashed the odd gem in his stroke play arsenal. SA will need more of the same after the break.

The desire to stand up to and counter the genius of India captain Virat Kohli, helped spur on Kagiso Rabada as he led the way for the SA attack on ...
Sport
4 days ago

SA's captain Dean Elgar says the third and final test against India at Newlands on Tuesday is his team's biggest match in 15 years as they look to ...
Sport
6 days ago