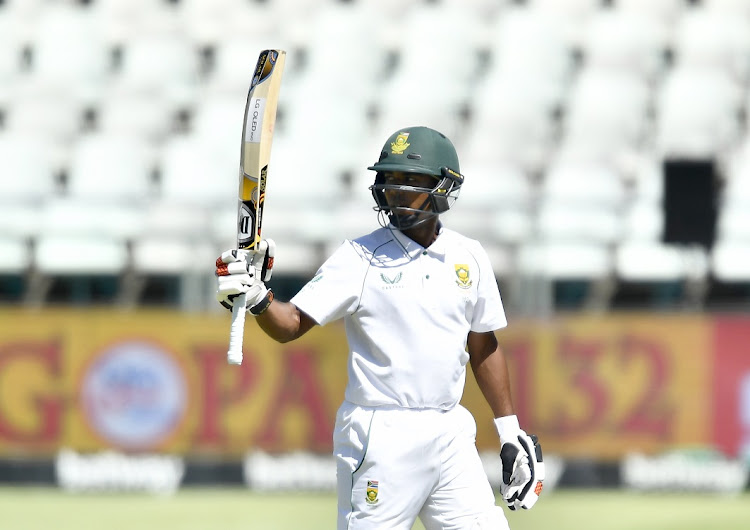 Keegan Petersen of SA celebrates going to his half-century on day four of the third Test against India at Newlands in Cape Town on January 14 2022. Petersen's 82 paved the way for the Proteas' series victory.
Image: Ashley Vlotman/Gallo Images

SA on Friday surged to an unlikely 2-1 Test series victory over India on the fourth day of the deciding Test here at Newlands.

Required to score 212 for victory, the Proteas, as they did at the Wanderers last week, reached the total with relative ease, again winning by seven wickets.

A second half-century in the match from Keegan Petersen (82) helped pave the way for the win, but there were notable contributions in the fourth innings chase from captain Dean Elgar (30), Rassie van der Dussen (41 not out) and Temba Bavuma (32 not out).

Bavuma brought down the curtain on an at times bitterly fought series when he hoicked a Ravichandran Ashwin delivery to the square leg boundary for four.

Earlier, Petersen, who reached his 50 off just 65 balls, and Van der Dussen gradually drew the sting from India's attack with their 54 run stand for the third wicket.

The series win came against the odds when you consider the degree to which the Proteas had their backs against the wall in the second Test, having already lost the first.

India throw everything at Proteas but stare down the barrel

Keegan Petersen and Rassie van der Dussen rode what India's attack threw at them and batted SA to within touching distance of a series victory by ...
Sport
1 week ago

The team showed the courage and fortitude, perhaps embodied best by captain Elgar, to stay in the contest and eventually wear India down in the second and third Tests.

Both, of course, had been hard fought and were very much in the balance until SA showed their superiority in rare back-to-back successful stints at the crease in the fourth innings.

The series win will come as a massive boost for the team in transition and will put a significant tick behind the name of coach Mark Boucher.

There were distinct signs the Proteas were ready to turn the corner with their series victory in the West Indies last year, and if there were doubts about the potency of the opposition on that occasion, there would be none after this series against the top ranked Test team in the world.

India are redoubtable adversaries. They have acquired the hard-earned skill of winning away from home, but on this occasion SA's sheer doggedness wore them down.

I'm pretty elated. It will probably sink in in a day or two, maybe tonight.

India were never going to go away quietly. Yes, their challenge waned in the SA fourth innings but they remained hyper-competitive, even if it was just verbally.

They voiced their displeasure on day three at some Decision Review System decisions but captain Virat Kohli acknowledged after the Test that there were moments when they let themselves down by not seizing key moments. Kohli and company may yet face the music for the petulance they displayed into the stump microphone on Thursday.

For opposing captain Elgar, however, there was much to smile about.

“I'm pretty elated. It will probably sink in in a day or two, maybe tonight.”

He had much to be proud of.

Petersen, who was named player of the match and series, was unfazed by the weight of the occasion. He has started to warm to Test cricket, while in Marco Jansen SA have a player who gives them a long awaited point of difference.

Pace ace Kagiso Rabada splendidly led the attack by bagging 20 wickets in the series. He stepped up to the plate when required, changing the course of the series at the Wanderers, while Lungi Ngidi did the same with an impressive burst in India's second innings at Newlands.

Emotions ran high as the third and deciding Test edged closer to climax on the third day at Newlands on Thursday.
Sport
1 week ago

The inconvenient truth facing the Proteas in the remainder of their Test series against India is that they, in every sense, will be doing the chasing.
Sport
1 week ago