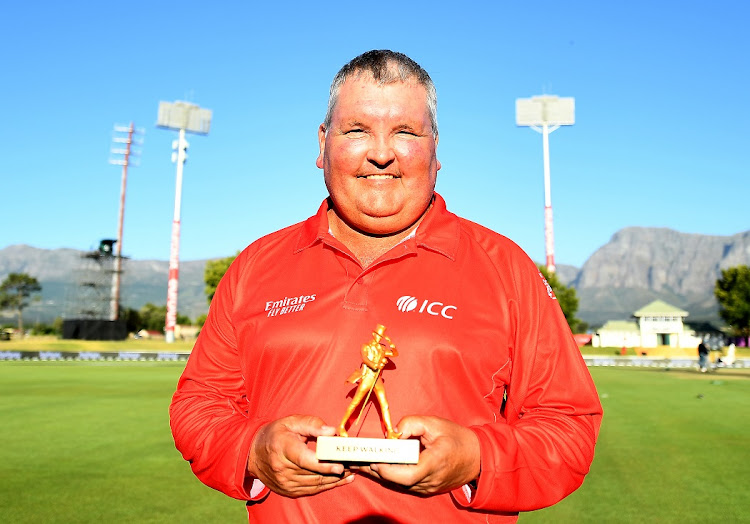 Umpire Marais Erasmus poses with a Johnnie Walker trophy for his 100th ODI match after the first One Day International between SA and India at Boland Park in Paarl on January 19 2022.
Image: Ashley Vlotman/Gallo Images

The International Cricket Council (ICC) has congratulated SA's Marais Erasmus for reaching the landmark of officiating in 100 men’s ODI matches as an on-field umpire.

Erasmus, a member of the Emirates ICC Elite Panel of Umpires, stood in his 100th ODI in the first match between SA and India at Boland Park in Paarl on Wednesday.

“It is no surprise he has reached this milestone and I am sure he will continue to do well in the coming years. I congratulate him on behalf of everyone at the ICC and wish him all the best for the future. He has served the game well and is a role model for many aspiring umpires the world over.”

Erasmus said: “It is an honour to be officiating in my 100th ODI.

“I have enjoyed my time as an umpire and will continue to do my best in the times to come. My experience as a player has obviously helped me during my journey and I am privileged to remain connected with the game.

“I thank the ICC, Cricket SA and all my colleagues for their support. I would also like to take this opportunity to thank my family and friends, without whom I could not have come so far.”

The Proteas have withdrawn frontline fast bowler Kagiso Rabada from the squad to take on India in the three-match ODI series starting on Wednesday in ...
Sport
3 months ago

SA rode the momentum of their Test series win over India into the ODIs by winning the first one by 31 runs at Boland Park in Paarl on Wednesday.
Sport
3 months ago

India captain KL Rahul says SA will face a trial by spin in the first two One-Day Internationals of the three-match series starting on Wednesday that ...
Sport
3 months ago