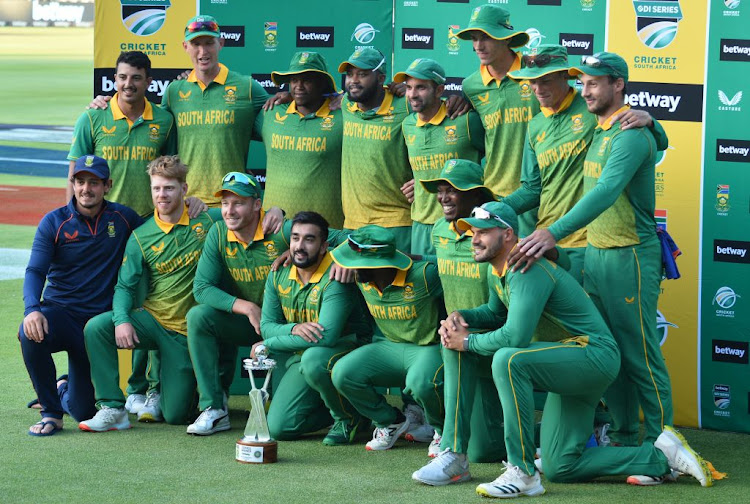 SA team members pose with the series trophy at the post match presentation after the 3rd One Day International match between South Africa and India at Newlands on January 23, 2022 in Cape Town, South Africa.
Image: Grant Pitcher/Gallo Images

The New Zealand Blackcaps will play both of their February Tests against SA in Christchurch, while a one-day international (ODI) series against Australia in March will be contested exclusively in Napier, New Zealand Cricket announced on Thursday.

The changes have been prompted by ongoing concerns about the spread of Covid-19, with the reduction in travel hopefully reducing the chances of an outbreak that would put matches at risk. Wellington is the big loser in the reshuffle.

It had been scheduled to host the second NZ-SA Test and the first two NZ-Australia ODIs. In another schedule change, the NZ women's White Ferns' series against India (one Twenty20 and five ODIs) will be played solely in Queenstown.

“These risk mitigations are based on avoiding known Covid-19 hotspots, and include limiting air travel, limiting accommodation transfers and, essentially, operating in safer environments,” said NZ Cricket CEO David White. “We know the more domestic flights we have, and the more movement there is between hotels, the greater the chance of a match or even a series being put at risk.”

White acknowledged the disappointment Wellington cricket fans would no doubt experience, but said the most important thing was to maximise the chances of the matches being played.

“It's a very difficult time for everyone,” he said.

Despite allegations of “gross misconduct” hanging over his head, coach Mark Boucher will be at the helm when the Proteas travel to New Zealand for a ...
Sport
4 months ago

Australian cricketers are on edge barely a month before their first tour of Pakistan in 24 years amid an uptick in terror attacks in the Asian ...
Sport
4 months ago

Suné Luus will lead the Momentum Proteas in the four-match ODI series against the touring West Indies in the absence of injured captain Dané van ...
Sport
4 months ago