SA can and must still get better at the Women's World Cup, says Kapp 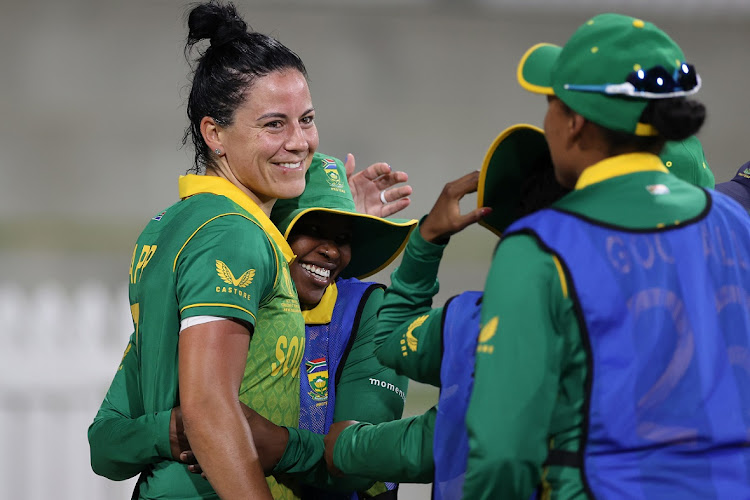 The Momentum Proteas may have an unblemished record at the 2022 ICC Women’s Cricket World Cup in New Zealand, but star all-rounder Marizanne Kapp says they have plenty more to offer.

Kapp put on an impressive display with bat and ball to help the side overcome England in a nail-biting three-wicket victory on Monday.

The result moves SA into second position in the league stage behind Australia, who have a higher net run rate,  and was the first win for SA over the English in a World Cup in more than two decades.

Kapp scooped the player-of-the-match award, taking a first-ever one-day international 5/45 in 10 overs to restrict England to 235/9.

The 32-year-old provided backup with the bat as she scored 32 runs off 42 balls to go with Laura Wolvaardt’s 77 off 101 and captain Sune Luus’s 36 in 49 to inflict a third straight tournament defeat on the defending champions.

Despite her heroics, Kapp was upset at losing her wicket so close to the end, but said she was confident her teammates would take them over the line.

“I was a bit annoyed with myself and I probably should have finished that game. So that put a lot of pressure on the two batters who were in the middle,” Kapp said.

“But they [Trisha Chetty and Shabnim Ismail] are experienced players who have played more than 100 games, so I backed them to take us to the end.”

Kapp, who has played 120 ODI matches for the Proteas, said it was a proud moment for her to take five wickets for the first time in her career and even more so in such an important clash.

She admitted SA are yet to hit their stride with the bat, but said the bowling was a big factor in being able to produce positive results.

“For as long as I can remember our biggest strength has been our bowling. There are a few of us who have played for SA for a long time, so one would think we know what we are doing when we step out onto the field.

“I think the reason we have done so well over the past few years is because our batting has been really good. [Though] we have been a bit slow in the past three matches.

“I don’t think we are anywhere near our best, especially with the bat, so I think today [Monday] was a step in the right direction for us.”

Kapp said overcoming their England hoodoo in World Cup tournaments was a testament to how hard the team had worked on all facets of their game. The win would help them build confidence.

“The first two games probably did not show the type of cricket we can and want to play — even today [Monday] we scraped the runs together and managed to get over the line.

“We know the heartbreak we’ve had in previous World Cup tournaments and [in matches in England], so we came with different plans — luckily it paid off for us.

“I believe this team will get stronger with each game we play from this point onwards.”

Regular Proteas captain Dane van Niekerk, who is missing the 2022 tournament due to an ankle injury, has been a passionate supporter of SA on social media since the tournament began.

“I believe a lot of the performances we have had in the past year, year and a half, are because of her and how she has carried this team for such a long time,” Kapp said.

“It is sad that she is not here to enjoy this win with us, but I know she is our biggest supporter.”

The Proteas face hosts New Zealand next in Hamilton on Thursday.

SA hold their nerve to squeeze past Pakistan

South Africa continued their promising start at the ICC Women's Cricket World Cup by registering a second win which puts them in good nick ahead of ...
Sport
5 months ago

SA are aware that they can’t afford another sloppy performance when they take on Pakistan in Mount Maunganui, New Zealand, in their second ICC ...
Sport
5 months ago