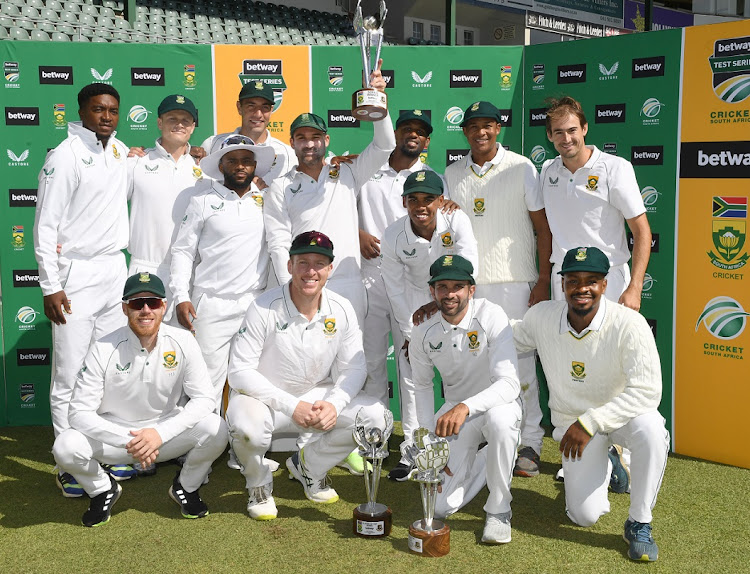 The victorious Proteas after beating Bangladesh in the second Test and series with their win at St George's Park in Gqeberha on April 11 2022.
Image: Lee Warren/Gallo Images

Proteas Test captain Dean Elgar said the potential selection headaches for some tough assignments to come would be good for SA's selectors as the series against Bangladesh has showcased some of the depth in the squad.

Depleted SA completed a 332-run demolition of their Asian counterparts in the second Test in Gqeberha on Monday morning, after their 220-run win in the first Test, to claim a 2-0 whitewash.

SA had key players ineligible due to their involvement in the Indian Premier League (IPL).

Elgar said his message ahead of the series for those who came in and performed against Bangladesh was to try to put in performances that would bring about more fierce competition for spots in the playing XI. He felt they had done well showing they have what it takes to compete at a higher level.

“Ultimately my message for the guys coming in was to, ‘Put those guys [at the IPL] under pressure, go out there to make a play for yourself, make a play for the team and be a team player.’

“[I wanted] them to show their selection was definitely warranted and not undersell their value as a young cricketer coming into an environment where they are pretty fresh.

Proteas rip through Tigers’ tail for second big Test win, and the series

Keshav Maharaj took seven second-innings wickets as the Proteas dismissed Bangladesh for a meagre 80 runs to claim a comprehensive 332-run victory at ...
Sport
2 months ago

“It is a great headache to have. You always want more options than none, and by giving guys experience you obviously create more depth going forward.

“We have a few extremely challenging away series coming up, but we are just going to have to focus on the first one.

“We can’t look too far ahead — we have to focus on the England series first and foremost.

“Our Test side is in a very good position at the moment.”

Elgar said it had been a fruitful summer of cricket for his charges, having won five out of the seven Tests they played.

“I don’t think many people would have given us those stats at the start of the season, but there was a lot of work behind the scenes that went into this — it didn’t just happen by fluke.

“We have had a very successful summer, not only as a Test side but as a cricketing nation and I feel we are on the right path to doing things in the correct way from a team point of view.

“There are a lot of things for us to build on but my job is to dissect and try to get the negatives out of still having a successful summer.

“I am extremely proud of the Test summer we have had, but also the depth we have shown in terms of our selection pool, giving guys opportunities so they can see what Test cricket is all about.”

Elgar said an area where SA can improve is players scoring more big centuries which would put the side in more advanced positions in matches.

“That is a lot of emphasis on my plate as well — our senior guys need to get those three-figure marks when we get into those positions.

“We know how much that stands for from a batting point of view, how much pressure you put on the opposition when you are able to get to those three-figure marks.

“Our batting department is one negative area where we haven’t nailed down those hundreds,” Elgar said.

Opener Sarel Erwee and all-rounder Wiaan Mulder have been ruled out of the second and final Test against Bangladesh at St George’s Park in Gqeberha ...
Sport
2 months ago

Proteas batsman Sarel Erwee believes his close relationship with Dean Elgar has played a major role in how well they have recently combined as ...
Sport
2 months ago