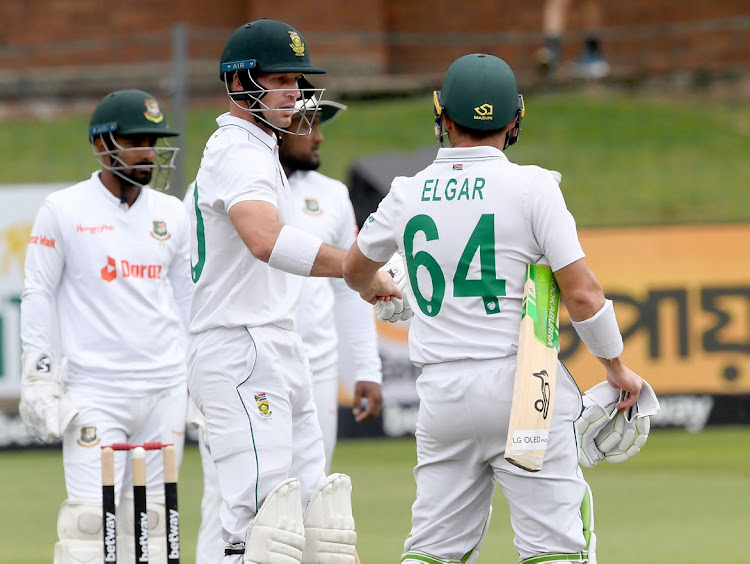 SA's Sarel Erwee and Dean Elgar go to their 50-run partnership on day 3 of the second Test against Bangladesh at St George's Park in Gqeberha on April 10 2022.
Image: Lee Warren/Gallo Images

Proteas batsman Sarel Erwee believes his close relationship with Dean Elgar has played a major role in how well they have recently combined as openers.

Having started the innings on eight occasions since the Dolphins player  made his Test debut, the pair have been involved in some important stands.

Erwee scored a brisk second innings of 41 off 66 in a 60-run opening stand with Elgar to put SA in a commanding position heading into day four of the series-deciding second Test match at St George's Park on Monday.

“I think we share a good relationship off the field, so we kind of get to know each other. I think taking that relationship onto the field makes you understand your partner a little better, what makes me tick, what makes him tick, and we understand that quite well about each other at the moment,” Erwee said post-play on Sunday evening.

He said SA had an idea in mind what score they felt would be comfortable enough to defend from a Proteas point of view, hence their positive stroke-making, particularly in the second innings as they set the tourists 412 to win. That total created a record-setting second innings chase at St George's for Bangladesh.

“We had a minimum score of a 400 lead we were looking at before we were going to declare and a certain amount of overs in which to get that lead,” Erwee said.

“It was always in the plan [to let them bat again before the close of play] and I suppose that is why you saw some positive shot-making while we were batting.”

With some big away assignments on the cards for the Proteas, Erwee said all he can do is control his own performances and try to score big runs for the team.

“Basically I have to control the controllables, which is me batting out there. If I make little mistakes, I am not putting my hand up for future stuff.

“I have to analyse and relook at certain things. Luckily I have got some good time. It is the end of our season.  It's about controlling what I can, keep batting and I have to put some bigger scores on the board to help myself.”

Asked about the success of spin twins Keshav Maharaj and Simon Harmer, Erwee said: “They are obviously experienced campaigners who have played a lot of cricket over a number of years so they know their craft through and through.

“They have different variations, they bowl at different speeds, and they have bowled in different conditions around the world.

“I would like to think their partnership stands us in good stead going forward as a national Test side,” he said.

Play resumes on day four with Bangladesh reeling at 27/3. SA reached 453 in their first innings, then bowled out Bangladesh for 217. SA declared on 176/6 in their second innings.

Keshav Maharaj says producing a good performance will give teammate Wiaan Mulder a boost in confidence as the Proteas look to retain their ...
Sport
2 months ago

Despite losing five wickets on day one of the second Test match against Bangladesh, Proteas batsman Keegan Petersen was confident they could build on ...
Sport
2 months ago

Bangladesh spinner Taijul Islam dismissed Keegan Petersen on the brink of tea to leave the Proteas on 84 for two with a lead of 320 runs on day 3 of ...
Sport
2 months ago

The Proteas continued to pile on the runs as they moved to 384/7 at lunch on day two of the second Test against Bangladesh in Gqeberha on Saturday.
Sport
2 months ago