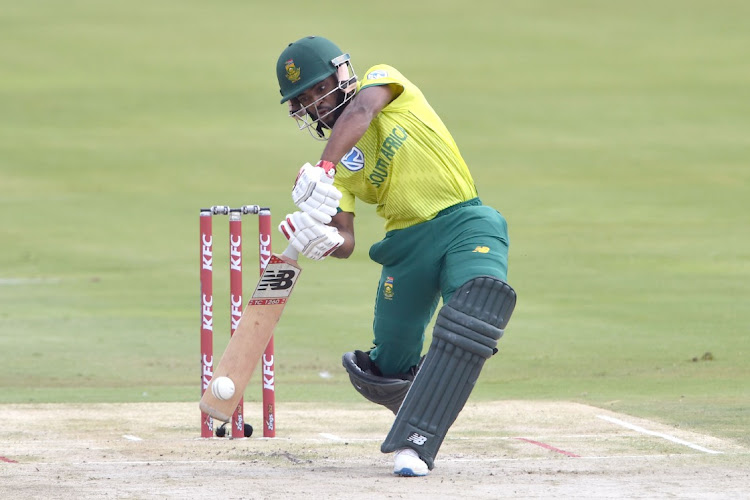 Temba Bavuma has grown into his role as captain and top-order batsman.
Image: Lee Warren/Gallo Images

Competition for places are still up in the air for some of the Proteas players who are desperate to represent SA in the T20 ICC Men's World Cup in Australia in October.

SA’s T20 side will play 10 matches against India, England and Ireland before they arrive in Australia, a good platform for all players to claim their position in the World Cup squad.

The Proteas start the build-up for the World Cup with five matches against India in Delhi, Cuttack, Vizag, Rajkot and Bengaluru from Thursday, where a number of players will be looking to nail down places.

After taking on India, SA will be in England for a tour that includes three T20s against their hosts in Bristol, Cardiff and Southampton before taking on Ireland in two matches in Bristol.

In what will be SA’s return to international cricket for the first time since the ICC T20 World Cup late in 2021, coach Mark Boucher will be casting his eye on some of the players on the fringes of the team.

Ahead of these important series, the Sunday Times takes a look at the strong and weak points of this team that will once again be pressured to finally win an international tournament.

Captain Temba Bavuma has grown into the leadership role and dished out impressive performances as a crucial member of the top batting order in this format.

The return to action of premier fast bowler Anrich Nortje, who claimed nine wickets in six matches during the recently completed IPL, is a massive boost for the Proteas.

On the batting front, the team has Quinton de Kock, Aiden Markram, David Miller, Ngidi, Dwaine Pretorius, Rabada, Rassie van der Dussen and Jansen, who will be familiar with Indian conditions after playing in the IPL.

Another big plus for SA is the form of middle order batter David Miller who helped the Gujarat Lions to their maiden IPL title with a solid contribution of 481 runs from 16 matches.

On conditions that may be favourable to spinners, SA have left-arm Chinaman bowler Tabraiz Shamsi who is sitting pretty at the top of the T20 bowling rankings ahead of Adil Rashid of England and Josh Hazlewood of Australia.

It is worth mentioning that Markram, who has struggled in Test cricket lately, is currently the second ranked T20 batter after Pakistan captain Babar Azam.

Opener Reeza Hendricks had an underwhelming World Cup last year in the United Arab Emirates (UAE) where he scored 56 runs in four innings and eyes will be on him again this time around.

The top and middle order of Van der Dussen, Markram, Bavuma and Miller has often flattered to deceive with major collapses and this is another area of serious concern.

Since the retirement of the great Jacques Kallis, SA has struggled to find a reliable all-rounder and eyes will be on Pretorius and returning Wayne Parnell.

The jury is still out for batter/wicketkeeper Heinrich Klaasen who has often struggled with consistency while it remains to be seen how uncapped batter Tristan Stubbs will fare at international cricket.

Stubbs, the 21-year-old, right-handed middle order batter has been rewarded for his  impressive form last season in the Cricket South Africa (CSA) T20 Challenge for the Gbets Warriors.

Another player who has a lot to prove is fast bowler Ngidi who played the last of his 23 T20s against Ireland in Belfast last year and went on to miss the World Cup.

Ngidi, who recently played Test and ODI cricket against India and Bangladesh respectively, did not see action during the recently concluded IPL where he was in the books of the Delhi Capitals.

Ireland captain Gaby Lewis led from the front with an inspired half-century as they overcame the Momentum Proteas by 10 runs in the first of three ...
Sport
4 weeks ago

Momentum Proteas coach Hilton Moreeng has declared the team ready for the three-match T20 series against Ireland in Dublin starting on Friday ...
Sport
1 month ago

Over the next few months, SA T20 side is scheduled to play 10 matches against India, England and Ireland before they arrive in Australia in October ...
Sport
4 weeks ago

Blast from the past: Proteas bungle it against Bangladesh