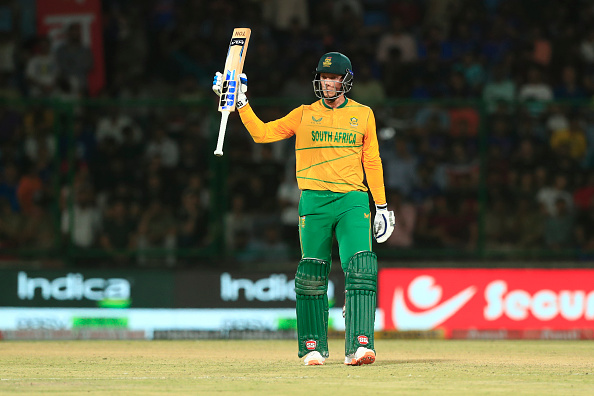 After he took time to get going during the seven-wicket win over India on Thursday in the first of five T20 matches, Proteas batter Rassie van der Dussen is planning to adapt quicker to the conditions.

Van der Dussen, who was dropped on 30 by the usually reliable Shreyas Iyer, put the SA under pressure as he struggled to score regularly during the early stages of his innings.

The second match moves to Cuttack on Sunday where SA will be looking to increase their series lead to 2-0 and Van der Dussen, who top-scored with 75 off 46 on Thursday, is targeting to get going early on.

“Individually, it is just about adapting a little bit quicker to the conditions,” he said after his unbeaten of 131 off 64 with David Miller (64) helped SA to cross the line for SA’s highest successful T20 run chase.

“You always put yourself under pressure to catch up at the end and also put the team under pressure. For the first 10 to 15 balls, maybe I must look at some options of scoring runs and putting their bowlers under pressure.”

Looking back at the match, Van der Dussen was happy that captain Temba Bavuma won the toss and put India, who managed 211/4, to bat first.

“It was a tough game but good toss to win, Temba made the right call there. We knew that it is a high scoring ground, they batted really well to get over 200 but we knew that if we batted well we can chase that down,” he said also praising his partner Miller.

“David batted really well to get me through a difficult patch there in the middle but we had clear plans and we just communicated well. It was trust in our plans and for each other and I am glad we can take it over the line.

“It took a while to get used to the conditions and get the pace of the wicket, it was a bit slow for about 30 balls but I always knew that if I can get one away momentum will shift.

“It was about trusting the game plan. We knew that if David and I were there at the end, we will get close and probably get over the line. It was a good wicket because there was some spin and something for the seamers with some swing.

“It was playing really well and with more than 400 runs in the day and lighting-fast outfield, which gives you value for your shots, it was great conditions for a T20 match.”

Following a brief break in the Maldives, Proteas middle order batter David Miller is refreshed for the five-match T20 series against India starting ...
Sport
3 weeks ago