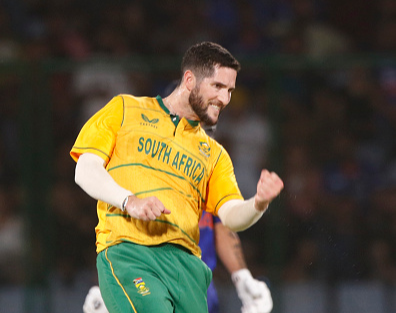 Assessing and adapting to different conditions is the name of the game for the Proteas in this five-match T20 series against India which is being played at different venues.

SA started with an impressive seven-wicket victory in a dry and skiddy Delhi on Thursday with David Miller and Rassie van der Dussen sparkling with an unbeaten stand of 131 off 64.

They take their 1-0 lead to Cuttack on Sunday where all-rounder Wayne Parnell has reported humid and sweaty conditions and a side strip that showed a bit of bounce.

Parnell, who is expecting a strong fightback from India, said they will have to deal accordingly with what is in front of them as they look to stretch their lead in the series.

“The message is to take one game at a time because we are playing at different venues. Over the last two years or so, because of bubbles, we ended up playing multiple games on the same venue.

“It is about assessing conditions and trying to adapt according to what we are faced with. The Cuttack wicket is completely different to the Delhi wicket and the remaining games we are also playing at different venues.

“Delhi was dry but here it is very humid because we are at the coast. It does have that humid feel to it and it was sweaty at training but the actual wicket and the outfield looks pretty good.

“It is about assessing and playing according to those conditions. From past experiences here in India, the ball tends to swing a bit in the first two to three overs.

“With us being at the coast, it might do that or a little bit of extra bounce might bring in the edge on the bat. But having said, because there is a little bit more bounce, it might play into the batters’ hands if they get set because when there is more consistent bounce you can strike the ball better.”

Parnell is playing in his first T20 for SA since the team’s tour to England in 2017 and he is a different player.

“If I do an assessment, two words jump out. I think trust for trusting my ability and everything that I have gone through. The other word is believe because they go hand in hand.

Though this is part of building up to the World Cup in Australia later in the year with coaches trying new things, Parnell still wants them to focus on winning the series.

“Firstly, winning the series here in India is very important and I am not sure whether we have won a T20 series here before but obviously that will be the first prize.

“And the bigger picture is the World Cup, it is a difficult one because we don’t know what type of combination we are playing yet. It can be seen as, not really a trial, but trying out different combinations but first prize will be to win the series.”

Daryl Mitchell scored an unbeaten 81, and splashed a six into a spectator's pint of beer, as New Zealand cruised to 318-4 from 87 overs at the end of ...
Sport
3 weeks ago

Following a brief break in the Maldives, Proteas middle order batter David Miller is refreshed for the five-match T20 series against India starting ...
Sport
3 weeks ago