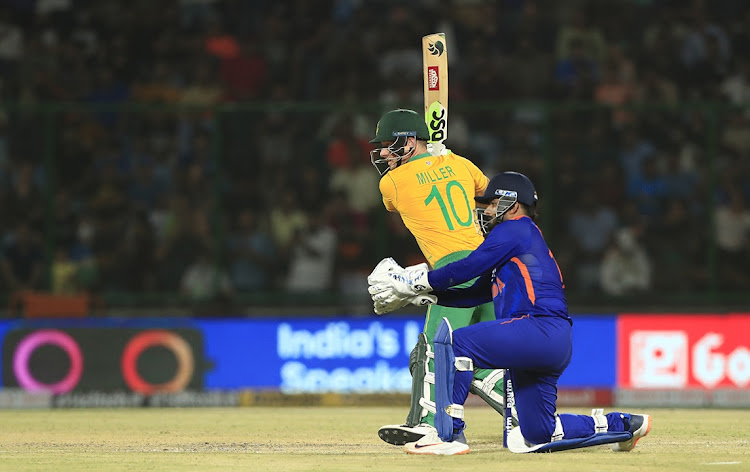 David Miller of SA plays a shot during the first T20 International against India at Arun Jaitley Stadium in Delhi on June 9 2022.
Image: Pankaj Nangia/Gallo Images

India opener Ishan Kishan says they will have to come up with a plan to tame David Miller in their Twenty20 series as the explosive SA batsman continues the rich vein of form he found in the Indian Premier League (IPL).

Miller played a key role in Gujarat Titans' IPL triumph in their maiden season last month when he finished as their third-highest run-scorer. The 33-year-old was in good form in Thursday's opening T20 international in Delhi, where he smashed 64 not out off 31 balls to help SA chase down a 212-run target.

The tourists were 86-3 at the halfway stage of their chase but Miller's 131-run partnership with Rassie van der Dussen, who was unbeaten on 75, ensured they prevailed with five deliveries remaining.

Kishan, who topscored for India with 76, said the century-stand made all the difference and India will have to be wary of Miller in the second T20 of the five-match series at Cuttack's Barabati Stadium on Sunday.

“I think right now Miller is in great form,” Kishan said. “We will plan something for these two because if Miller gets going, it is very hard to stop him. At the same time, it makes it easier for the other batsman also at the other end.”

Van der Dussen said Miller's explosive batting eased the pressure on him early in his knock.

"[India bowler] Avesh Khan put me under a lot of pressure and didn't miss his mark at all. But Miller pulled me through with his knock,” van der Dussen said.

“I have been understanding my game a lot better in the last four-five years,” said the left-handed batter.

“I was going to keep going and Rassie was to pierce the gap or find a boundary. It was about reducing the dot balls.”

Mondli Khumalo’s mother Sibongile Khumalo has explained how relieved she was and shed a tear of joy when he heard the voice of his son on the phone ...
Sport
3 weeks ago