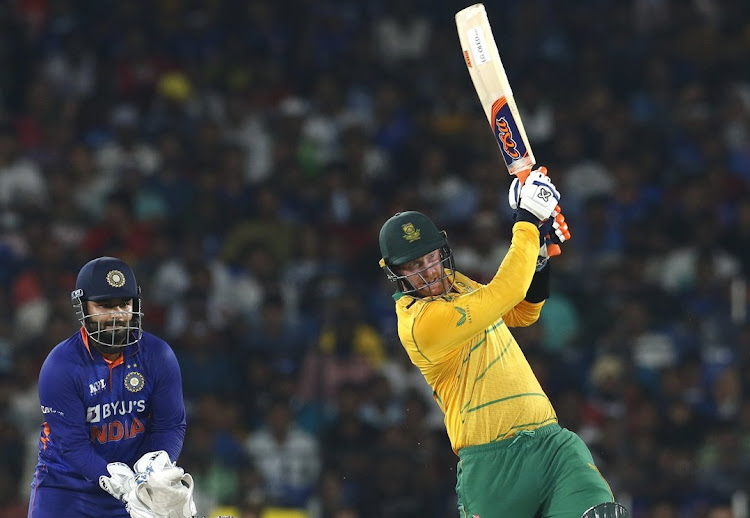 SA's Heinrich Klaasen smashing his way to a fourth career T20 half-century in the second game against India in Cuttack.
Image: Cricket SA/Twitter

Heinrich Klaasen capitalised on his chance selection to smash 81 off 46 balls as SA beat India by four wickets in the second T20 International in Cuttack on Sunday for a 2-0 series lead.

Bhuvneshwar Kumar claimed three wickets in the powerplay to reduce the Proteas to 29-3 in reply to India's modest of 148-6 after being put into bat. Klaasen, selected after wicketkeeper-batsman Quinton de Kock sat out with a hand injury, smashed five sixes and seven fours in his incendiary knock as SA romped home with 10 balls remaining.

David Miller scored the winning run for the tourists and remained not out on 20.

“Klaasen's was a top knock,” Miller said. “It is very tough to win in India, but we still have a lot of hard work still to do.”

Kumar finished with impressive figures of 4-13 but it was not enough to avert India's second successive defeat in the five-match series.

India lost Ruturaj Gaekwad in the very first over but Ishan Kishan (34) and Shreyas Iyer (40) raised their hopes of a big total at Barabati Stadium. Once they departed, India's middle order simply caved in.

Dinesh Karthik smashed an unbeaten 30 down the order but they still fell short of the 150-mark.

Rishabh Pant, leading a depleted India who were missing several front-line players including regular captain Rohit Sharma and batsmen Virat Kohli and KL Rahul, blamed their batting for the debacle.

“We were 10-15 runs short,” he said at the presentation ceremony.

“Bhuvi and all other fast bowlers though bowled very well... the spinners have to do better.”

The third match will be in Visakhapatnam on Tuesday.

Mondli Khumalo’s mother Sibongile Khumalo has explained how relieved she was and shed a tear of joy when he heard the voice of his son on the phone ...
Sport
3 weeks ago