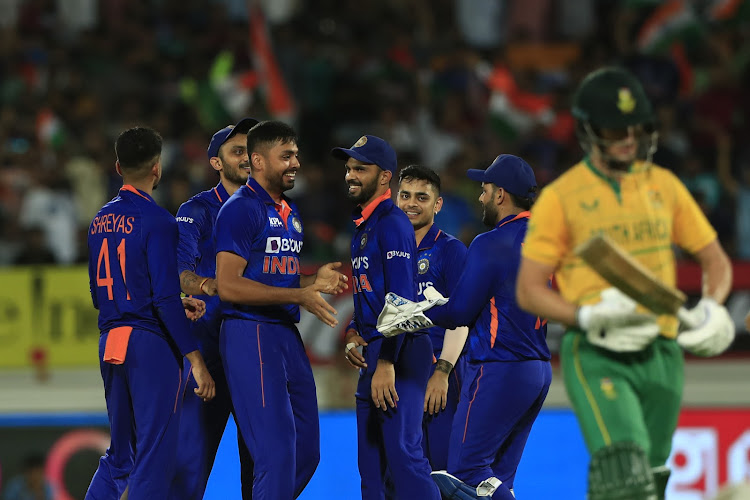 India produced a devastating all-round performance on Friday to thrash an embarrassingly poor SA side by 82 runs in their fourth T20 match to level the series 2-2 with one match remaining in Bengaluru on Sunday.

The Proteas started this five-match series with promise by convincingly winning in Delhi and Cuttack to take a 2-0 lead but familiar batting collapses reared their ugly heads in Vizag on Tuesday and in Rajkot on Friday.

They go into the final match of this series with India enjoying momentum after dominant back-to-back wins and they are favourites to wrap up the series on Sunday.

SA captain Temba Bavuma, who retired hurt in the fourth over, won the toss and elected to field first and India went on to put 169/6 on board that proved to be too much for SA who were bowled out for 87.

To make this win even more impressive for India, they won this match with two overs to spare and it also turned out that SA were bowled out for their lowest total in T20 matches.

This is also the biggest win by runs for India against SA in T20s.

In reaching their target 169, India were helped by a well-taken half century from Dinesh Karthik (55) who was assisted by all-rounder Hardik Pandya who smacked three boundaries and as many maximums for a well-taken 46.

Karthik and Pandya played a crucial role for India during the middle overs as they put together a magnificent partnership of 65 off 33 to drag India out of a spot of bother.

Ishan Kishan (27) and Rishabh Pant (17) also contributed but there was nothing much to write home about from the shifts of Ruturaj Gaikwad (5), Shreyas Iyer (4), Axar Patel (8) and Harshal Patel (1).

Lungi Ngidi, who was making his long-awaited return to the T20 side, was the pick of the SA bowlers with the scalps of Gaikwad and Pandya while Marco Jansen, Dwaine Pretorius, Anrich Nortjé and Keshav Maharaj ended with one each.

SA failed to recover from Bavuma’s early retirement due to injury with only Quinton de Kock (14), Rassie van der Dussen (20) and Marco Jansen (12) the notable scorers.

On a pitch where the ball kept low, the rest of the SA batters struggled and failed to reach double figures as they were rattled by Avesh Khan who ended with his best T20 figures of 4/18 on his father’s birthday.

Yuzvendra Chahal chipped in with two under his name while Harshal Patel and Axar Patel ended their shifts with one scalp apiece.

SA made three changes with Reeza Hendricks, Kagiso Rabada and Wayne Parnell replaced by Quinton de Kock, Marco Jansen and Lungi Ngidi but they failed to influence a positive result.

Proteas bowler Anrich Nortje says they will treat their fourth T20 match against India on Friday as a final as they aim to wrap up the series with a ...
Sport
2 weeks ago