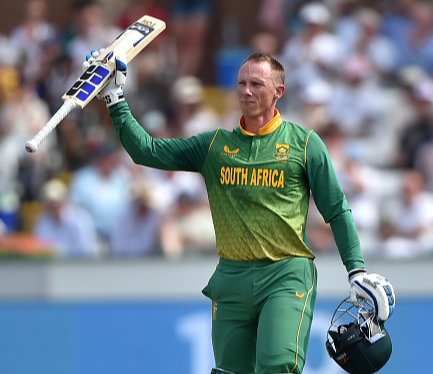 Proteas batter Rassie van der Dussen says his career-best century in SA’s 62 runs win over England in the first ODI on Tuesday was one of his best knocks in the 50 overs game.

Van der Dussen scored 134 off 117 balls at Emirates Riverside in Durham, including 10 boundaries, to help the Proteas take a 1-0 lead in the three-match ODI series.

Other notable scorers were Aiden Markram (77) and Janneman Malan (57).

Batting to an impressive 333/5 after Keshav Maharaj won the toss and elected to bat, and later restricting England to 271, the Proteas registered their highest total in the country.

Van der Dussen said his knock against the world champions was special.

“It is definitely a special innings — a hundred is always special with these crowds and against the world champions to set the tone in the first game,” he said, indicating he still has room to make improvements.

“I think I have played really well, but I will go and look at things like dot ball counts. I don’t think I made too many mistakes — it was one of those days where the ball went into the gaps.

“I think I hit one or two of their fielders, which I got away with, but I will dissect that and have a look where I can improve. It was a special day to be part of the win as well.”

Van der Dussen said he was always looking to evolve and get better.

“I am a type of guy when I go in I try to read the situation of the game and sort of plan my innings accordingly. Tying to adapt is one thing I try to work on, [and] having the game and options to try to put bowlers under pressure regardless of the situation.

“I won’t say much has changed, but as a cricketer you are always evolving, striving to get better, and it will be much of the same going forward.

“I’ll look at the footage of the game on Wednesday and talk to our batting coach to see where I can improve and, hopefully, in three days’ time do it all over again.”

SA’s win was also influenced by the contributions of the bowlers as they restricted England to 271 after 46 overs despite the efforts of Joe Root (86) and Jonny Bairstow (63).

“The bowlers were brilliant, we gave them feedback halfway through in terms of lengths and lines, they took it on board and they executed brilliantly. England couldn’t get to the rate they needed to stay in the game.

“You could see they were trying different things and strategies, but our bowlers kept them quiet throughout the match and they were brilliant. It was pretty hot, I think it was mid-30s, though for us coming from SA it wasn’t too bad.

“We just had a tour to India which was a lot worse — you could see the toll it [the weather] took on English players.”

Though it was a good win to start the series, Van der Dussen cautioned against his teammates going into complacency mode.

“It was a massive result for us. In saying that, it is only one match of a long tour. We will enjoy the win and have a look at the footage to see where we can improve in the next match.

“It has been a long few months, we came here 10 days ago because we had to prepare early and haven’t had a lot of time at home, especially the guys that were at the IPL [Indian Premier League].

“Obviously, there is still a long tour with lots of cricket still to be played, so with 10 days and playing two warm-up games we got used to the conditions and it was a good toss to win, and we executed brilliantly.”