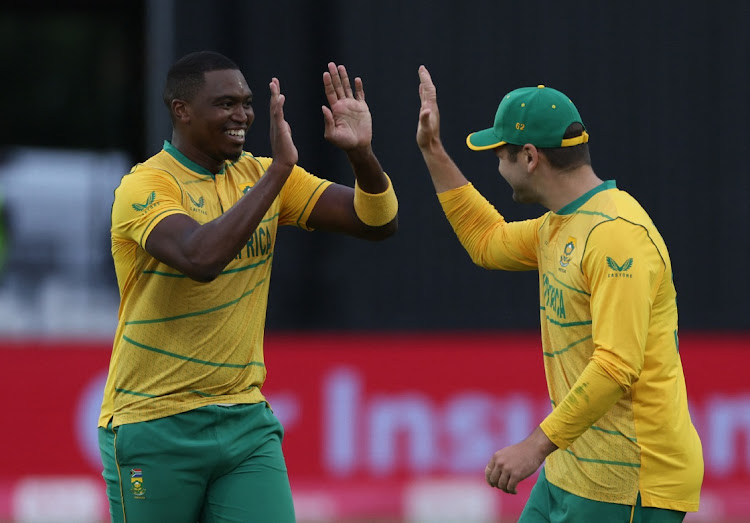 SA's Lungi Ngidi celebrates the wicket of England's Jason Roy with a teammate in the first T20 at the Bristol County Ground.
Image: PAUL CHILDS/REUTERS

The Proteas’ shambolic fielding and poor bowling eclipsed brave performances from Lungi Ngidi and Tristan Stubbs as SA suffered a disappointing 41-run defeat to England in the first of three T20 internationals at the Bristol County Ground on Wednesday night.

The Proteas won the toss and stand-in skipper David Miller opted to field first as England put on 234/3, the second-highest total for England's men in T20s.

England had an innings to savour while the South Africans probably couldn’t wait for it to end as, apart from Ngidi with 5/39 from his four overs, nothing seemed to go the way of their bowlers and fielders.

While the English were magnificent with the bat, they were also greatly helped by the visitors with their terrible fielding and substandard bowling.

SA's Quinton de Kock says it will become difficult for players to participate in all three formats of cricket if more games continue to be added to ...
Sport
3 weeks ago

The hosts set themselves up for victory scoring 87 runs in their last five overs.

The Proteas had a promising start as Ngidi dismissed openers Jos Butler and Jason Roy inside the first five overs.

Skipper Butler (22) was the first to head to the pavilions in the third over, caught by Miller with England having scored 28 runs. Ngidi struck again in the fifth over as he sent Roy packing with Heinrich Klaasen providing the catch.

After that the chaos began for SA as they dropped four catches that could have helped to avoid the onslaught by the dangerous Bairstow, who finished his innings with 90 off 53 balls.

Bairstow, with Dawid Malan (43), got England back on track. The two put on a 71-run partnership before Malan was dismissed by Andile Phehlukwayo in the 12th over.

Bairstow, dropped a few, was joined by Ali and they put up a great partnership of 106, taking the hosts from 112/3 to 218 when the latter was dismissed by Ngidi.

Ngidi finished with the most expensive five-for in T20I history. He also removed Liam Livingstone (5) as he did his best to save the night SA.

The stand-in captain has placed store in the experienced batsman as SA prepare to take on England in the first T20 international on Wednesday.
Sport
3 weeks ago

The other SA bowlers, especially Phehlukwayo (1/60) and Tabraiz Shamsi (0/43), would have hoped for a better day in the office.

England's bowlers weren’t going to let the victory slip through their fingers and they showed their intent early in SA’s innings.

Miller’s men didn’t have the best start to their big chase as, like England, lost openers Quinton de Kock (2) and Rilee Rossouw (4) early — in the second over as they both fell to Reece Topley and SA were 7/2.

Klaasen (20) and Reeza Hendricks (57) did their best to get SA back on track as their partnership produced 65 before the former was sent to the stands by Adil Rashid in the eighth over.

Hendricks also fell to Ali in 10th over. Stand-in skipper Miller was lost on the 14th over contributing just eight runs as it became clear that it would take something miraculous for SA to win.

Stubbs, with his 72 off 28 deliveries, lifted SA's slim hopes before he fell to Richard Gleeson (3/51), but the game was over as a contest before that for Proteas, who needed 85 in the final five overs to snatch victory.

Gleeson also claimed the wickets of Rabada for a duck and Phehlukwayo (22).

England’s decisive one-day international against SA at Headingley on Sunday was abandoned because of rain, with Proteas opener Quinton de Kock ...
Sport
3 weeks ago

Proteas wicketkeeper/batter Heinrich Klaasen does not believe the fact that SA have not won an ODI series in England in 24 years will weigh heavily ...
Sport
3 weeks ago

The Commonwealth Games are yet to get underway in Birmingham, but the Proteas Women already have their backs against the wall and their slim chances ...
Sport
3 weeks ago

SA out to break 24-year jinx against England

The Proteas have got to get their act together in today’s third and final ODI match against England as they chase a first ODI series win in England ...
Sport
3 weeks ago