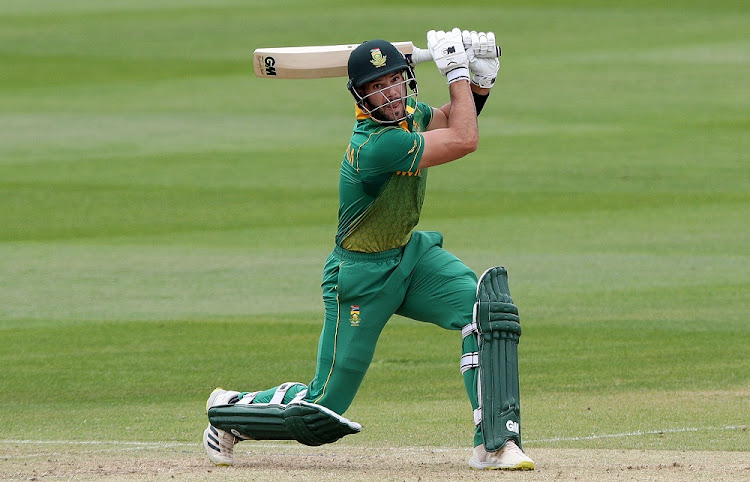 Aiden Markram bats for SA in the tour match against England Lions at the County Ground in Taunton on July 12 2022.
Image: Ryan Hiscott/Getty Images

Proteas batsman Aiden Markram says the team will not rest on its laurels as it gears up to take on Ireland in a two-match T20 international series.

Coming off the back of a nail-biting 2-1 series win against England, the 27-year-old right-hander believes the Irish pose a serious challenge to SA for Wednesday’s first match at the Bristol County Ground.

“It will be a new, exciting challenge for us. We have played them in Ireland in the last 12 months and they are a team that is improving with every series they play,” Markram said.

“I think it is about us just working and trusting the plans we have in place — that has been working for us. We know that if we take care of our space and play with the right intensity, hopefully that will be enough to get us over the line.”

Markram said the return of Reeza Hendricks and Rilee Rossouw, along with the emergence of Tristan Stubbs, has created healthy competition for places.

“The form they showed against England is really exciting for us. It creates some good competition among the squad, it is healthy competition for us to have.

“If I play and bat after them, somewhere in the middle order, it would be about playing the situation. If they get us off to a flyer, it is about me coming in and matching that intensity or adding more intensity to the innings.”

Markram felt that his stint in the Indian Premier League (IPL) played a major role in him getting his game back to a level he is satisfied with.

“Confidence is a huge thing in this game, especially for a batter. That tournament certainly provided me with a bit of confidence and belief that I may have been lacking before that IPL tournament.

“It played a role in terms of putting me in a better space mentally, giving me that belief that I can compete on the IPL stage with some really good cricketers in the world.”

Fast bowler Kagiso Rabada has been ruled out of the T20s against Ireland and now also looks in serious doubt for the three-match Test series to follow against England.

Rabada has a medial ankle injury and management will be hoping to have the pacy right-hander back in time for the first Test at Lords starting on August 17.

The Proteas have been dealt a blow ahead of their two-match T20 series against Ireland with the withdrawal of premier fast bowler Kagiso Rabada.
Sport
2 weeks ago

Proteas spin wizard Tabraiz Shamsi believes the squad can take much confidence from their all-around performance after securing a thrilling T20 ...
Sport
2 weeks ago

SA spinner Tabraiz Shamsi took five wickets to help his team bowl out England for 101 to win their decisive T20 international by 90 runs at the Ageas ...
Sport
2 weeks ago

Proteas have all to play for on Miller's big day

In-form Proteas batter Reeza Hendricks is grateful for the opportunities currently at his disposal and is looking forward to again contributing when ...
Sport
2 weeks ago