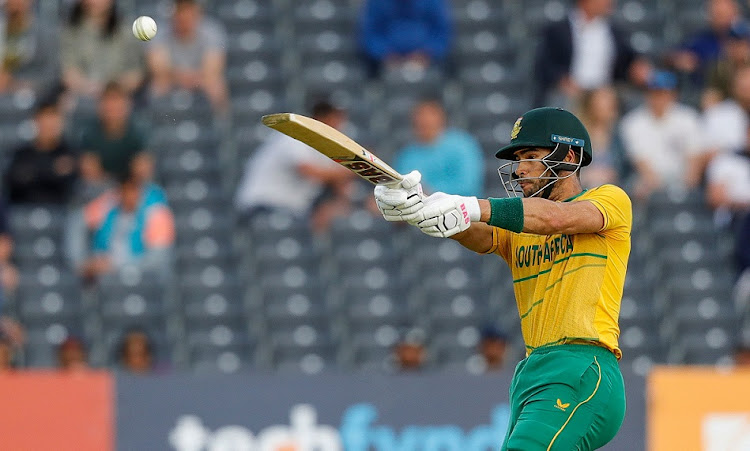 In-form Proteas opener Reeza Hendricks says tons of hard work and following coach Mark Boucher’s instructions to the tee have helped him join an elite group of cricketers such as Brandon McCallum and Chris Gayle.

Hendricks’s excellent run with the bat continued when he scored 74 off 53 balls in the Proteas' 21-run victory over Ireland in the opening clash of the two-match T20 international series in Bristol on Wednesday.

The South African has scored four consecutive T20I half centuries, including the three against England and is the sixth player to achieve the feat in the world.

Other players to have done it are New Zealand’s McCallum, West Indies’ Gayle, Craig Williams of Namibia, Rayyankhan Pathan of Canada and France’s Gustav Mckeon.

Hendricks could become the first player in the world to score five consecutive half-centuries if his excellent form continues in the second and final T20 against Ireland on Friday.

“I don’t think there’s any secret to it. I have been going about my business the way I have been and trying to follow the process on a daily basis. It’s in the nature of the way the game goes,” Hendricks said of his form. “It happened to me when I obviously got a good run and I’ve got some momentum on my side.

Proteas opener Reeza Hendricks scored a fourth successive T20 half-century on Wednesday to help his side to a 21-run victory over Ireland.
Sport
2 weeks ago

“Hopefully, I can continue with the momentum because we know how cricket goes — if it turns it can be a dark side. At the moment, it’s going well and I wouldn’t say there’s any secret to it. I’ve been working hard and following the processes.”

With the T20 World Cup in Australia fast approaching in October and November, Hendricks has joined a list of strong candidates pushing for places in SA’s final squad. He has been working hard behind the scenes to achieve that goal.

“I think a lot of work has gone into it. We obviously see how the T20 games have evolved. It was a mindshift issue too and the way the coach wants us to play,” Hendricks said. “I’ve been putting in a lot of hard work behind the scenes. Obviously if you start well it gives you confidence going into an innings. It has been something that I have been working on and hopefully it can continue.”

The Proteas meet Ireland in the second T20 in Bristol on Friday night (7.30pm SA time).

The Proteas have been dealt a blow ahead of their two-match T20 series against Ireland with the withdrawal of premier fast bowler Kagiso Rabada.
Sport
2 weeks ago

Proteas opener Reeza Hendricks scored a fourth successive T20 half-century on Wednesday to help his side to a 21-run victory over Ireland.
Sport
2 weeks ago

Proteas batsman Aiden Markram says the team will not rest on its laurels as it gears up to take on Ireland in a two-match T20 international series.
Sport
2 weeks ago

Proteas spin wizard Tabraiz Shamsi believes the squad can take much confidence from their all-around performance after securing a thrilling T20 ...
Sport
2 weeks ago