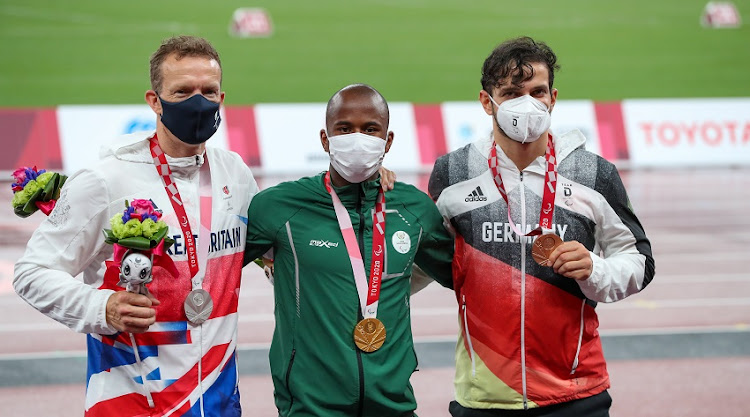 Ntando Mahlangu of South Africa receives his gold medal in the mens 200m T61 during the evening session of athletics on Day 10 of the Tokyo2020 Paralympic Games at the Olympic Stadium on September 03, 2021 in Tokyo, Japan.
Image: Roger Sedres/Gallo Images

With a high-stepping, long-kicking display of perpetual motion on Friday, Ntando Mahlangu won his second gold of the Tokyo Paralympics with a pair of prosthetics on which he said he was carrying the whole of SA with him down the final 80 metres.

His “legs” sported the SA team’s logo surrounded by Ndebele patterns with the colours of Afrikaans Hoer Seunskool, where he is in matric, thrown in for good measure. On those legs, the double amputee made a up a gap on the bend of the 200m on defending champion and Paralympic legend Richard Whitehead, and roared past him to win by a few lengths in 23.59 seconds.

In Rio, five years ago, the 14-year-old Mahlangu took silver as Great Britain’s Whitehead, a man of extraordinary mental and physical strength who has also completed the Comrades Marathon, won gold. When he was beaten in Tokyo, Whitehead showed the depth of character that marks the Paralympics, the 45-year-old hugging the South African before asking to swap race numbers with him as a sign of a “changing of the guard”.

“It’s a pity that there wasn’t a full crowd here to celebrate Ntando’s win,” said Whitehead. “He’s an athlete who deserves to have full houses watching him. He’s the future. When I won gold at London 2012 there were 80,000 people in the Olympic Stadium and it was a special moment, a life experience. Ntando deserves that.”

Ntando said he did not need the stadium to be full as “the love and the warmth from the Japanese people before coming to the stadium and all through the Games has been wonderful”, which was admirable for a 19-year-old who has not been one to talk before he walks.

On a quiet day for the SA team at the Tokyo Paralympics on Thursday, when a breath was taken and shoulders squared for the final rush at the last few ...
Sport
11 months ago

“Coming into the race I didn’t want to talk too much about winning and I certainly didn’t take the gold medal for granted. I had changed a few things and my start was a bit slow, but I knew where in the race I would accelerate. I was very well prepared,” said Mahlangu.

“I’m grateful for the win and I’m also happy for my coach who has put so much work into us getting this far. We have been working together for a long time now. At the end of the day I’m very happy, You know, I go back home with two gold medals and one world record. Not a lot of people can say that. I can be proud of myself.

“I was well prepared for this race and I think you could see that. To come from behind on the bend shows that I executed things properly. The problem with being behind is not the fact that you’re behind, but it’s making sure you then don’t panic and execute things properly in the second half of the race, and finish the race off.

“I am very, very happy and very happy with where I am at this stage in my career. I can be proud of myself and there’s no need to put pressure on myself, I still have many years ahead of me. The long jump world record did take a bit out of me, though. I could feel it for the first 110m or so. But, when I got into the second half of the race my body responded and I could execute the race in the way that I had planned.”

Tebogo Mofokeng is planning something big for Paris in 2024 after he finished fourth with an African record (50.09 secs) in the 400m, the 21-year-old within touching distance of bronze. Daniel du Plessis was seventh in the same race in 53.56 secs. Charl du Toit’s fourth place in his heat (24.04 secs) was just outside the final qualification time.

Kat Swanepoel took fourth in the 50m backstroke final in 50.17 secs, just over half a second outside bronze.

And then there were five. On Tuesday, South African athletes won their fourth and fifth medals at the Tokyo Games, the first in the morning heat of ...
Sport
11 months ago

There were many people Ntando Mahlangu wanted to thank for his gold medal in the long jump on Saturday night, but he took the time to pay a special ...
Sport
11 months ago