Several of the late Joost van der Westhuizen’s 1995 World Cup winning teammates will act as pall-bearers at his memorial service in Pretoria on Friday. 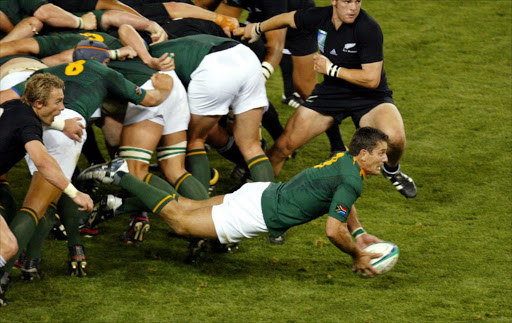 Van der Westhuizen‚ the former Bulls and Springbok scrumhalf‚ died in a Johannesburg hospital on Monday following a six-year battle against amyotrophic lateral sclerosis‚ a form of motor neuron disease (MND). He was 45.

Organisers of the memorial‚ to be held at Van der Westhuizen’s beloved Loftus Versfeld‚ confirmed that most of the ’95 World Cup winning team will be in attendance and that several of the players would carry Joost casket after the motorcade enters the stadium.

Captain of the victorious 1995 winners Francois Pienaar will lead the eulogies to his fallen teammate. Van der Westhuizen was an instrumental figure during the tournament on home soil 22-years ago‚ especially in the final with his superb defence on the marauding All Black wing Jonah Lomu.

Pienaar on Monday described Van der Westhuizen as an ‘extraordinary’ player – a sentiment that has been shared across the world in hundreds of messages since his death.

Minister of Sports and Recreation Fikile Mbalula will give a speech while erstwhile teammate and chief executive of the SA Rugby Legends Stefan Terblanche will also eulogise his former teammate.

Bill Beaumont‚ chairman of World Rugby‚ has also flown out from Dublin and will attend the memorial where he is also expected to say a few words on behalf of the game’s governing body.

SA Rugby president Mark Alexander will represent his organisation while over 20000 people are expected to attend the service.

Following a private ceremony for the close family and loved ones earlier on Friday morning‚ Van der Westhuizen’s casket will be escorted to Loftus Versfeld.

The gates to the stadium will be opened to the public who wish to attend the ceremony paying respects to the legend.

Meanwhile‚ On Thursday the Bulls Super Rugby team beat the Chiefs 28-7 in a pre-season friendly in Brisbane and dedicated the win to their former skipper. The players wore black armbands as a mark of respect.