Joost memorial: ‘As a coach you wished you had 15 Joosts’

The memorial for Springbok legend Joost van der Westhuizen is being held at Loftus Versfeld in Pretoria on Friday. 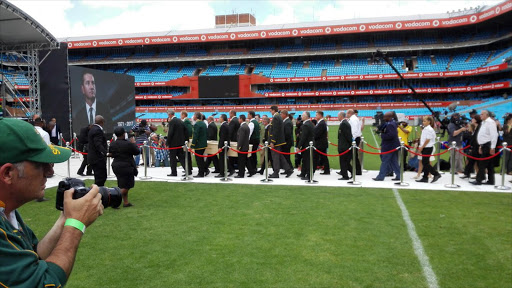 The Bok and Blue Bulls scrumhalf died aged 45 on Monday after a long battle with motor neuron disease.

Here is some of what has been said so far:

“There can’t be a better place to say goodbye than Loftus Versfeld.

“Since high school‚ everybody spoke about him and when he arrived at Loftus‚ he made a huge impression.”

“He played with broken ribs in 1995 and played two World Cups without cruciate ligaments.

“That tackle on Jonah Lomu was the one incident that changed the 1995 final.”

“He was an incredible competitor and it was a privilege to play alongside him for a short while.

“He was uncompromising and didn’t cut you slack because you were a youngster in the team. You had to earn your stripes and once you’d worked hard enough and proven to him you had what it took to be a Springbok‚ you got up to a different stage [in his eyes].

“I knew I had done enough to impress him‚ when he pulled his first prank on me. He taught me how to be a Springbok.”

“When I started with the Bulls I didn’t want to be near Joost because I was a bit scared of him‚ but once I got to sit next to him at the back of the bus‚ I realised what a leader he was.”

“[1995 World Cup coach] Kitch Christie had no favourites‚ but I confessed to the other 1995 players today that he always put Joost’s name first on the team sheet.

“He had such confidence‚ which flowed over to the rest of the team. He was a massive presence at the World Cup‚ but his real strength and bravery showed in the years after his retirement.”

“I’m sad but we must celebrate what he did for people who suffered from MND.”

“He was a phenomenal bloke to have in your team because he always gave his best.

“As a coach you wished you had 15 Joosts.

“He had so much talent and the tries he scored were phenomenal. You tend to forget how good he was.”

“Everybody came to watch him play …we were just the rest of the team. He was a great character and he was my roommate for seven years‚ which led to the joke I slept with Joost more than he did with his wife.

“It’s a sad day‚ but a good friend is going home to where he should be. We will miss him.

“He lived a full life – he was always the life of the party and the leader who brought people together on and off the field.”

Watch Joost's casket being carried into the stadium: