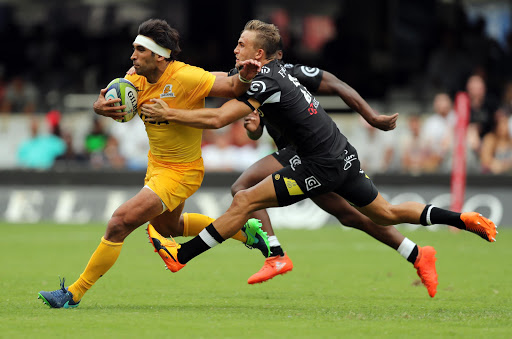 Young Sharks centre Jeremy Ward has been thrust into the limelight because of Andre Esterhuizen's six-week suspension and seems to be handling it very well.

It's that kind of level-headed nature that was needed after Esterhuizen's brain fade in the ill-tempered 9-all draw against the Rebels two weeks ago.

Ward‚ though‚ understands the importance of Esterhuizen to the Sharks cause‚ while understating his own value to the team.

“In the form Andre was in‚ he'd be a big loss for any franchise but when you're in the squad‚ you have to find a way of stepping up‚" Ward said.

"I'm just looking forward to stepping up every time when I get the chance and I'll play my best every time I get the opportunity to do so.

“With each game we're becoming a bit better and we're finding a bit more confidence. As the season goes on‚ with more games we play‚ we get to learn more from each other and from the guys who've been playing Super Rugby for a long time."

After their forgettable draw against the Rebels‚ the Sharks will have something to prove against the Force on Saturday afternoon at King's Park.

The troubled Perth side have long forgotten how to play rugby and their forte is to frustrate teams for as long as possible.

Crack teams like the Lions and the Chiefs were reduced to gutter rugby and hand-to-hand combat to get out of Perth intact.

Having seen how frustrated the Sharks were against the Rebels‚ the Force could look at the Sharks as one of those teams who could suffer from their spoiling tactics.

However‚ the Sharks displayed their versatility through their deserved 33-25 win against the Jaguares in Buenos Aires and Ward feels they can step up a notch against the Western Australians.

“We had a quote for this week which said good teams gain momentum but great teams increase momentum.

"That's what we're looking to do this week. We know we need to step up and play better rugby‚ especially at home‚” Ward said.

"They do have some dangerous players but it's about us pitching up on the day and meeting our standards.”