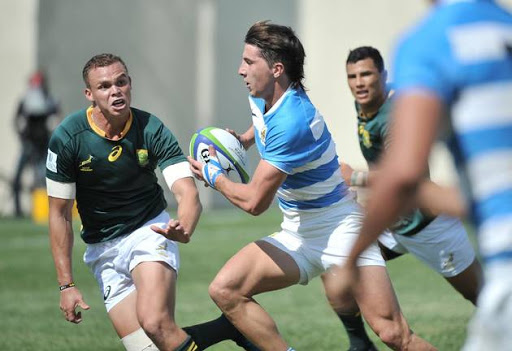 The Junior Springboks produced their best performance in years‚ thrashing Argentina by a record margin while scoring 11 tries to book their place in the World Rugby Under-20 Championship semi-finals.

It was an emphatic display in Tbilisi by the ever-improving Junior Springboks.

It started from rock solid scrums and lineouts‚ and continued with an attacking tactical kicking master-class and brilliant interplay from the backs.

Last year SA lost twice to Argentina in Manchester‚ including the bronze medal match‚ so there was an element of atonement for the Junior Boks.

However‚ it only becomes more difficult from here on in despite this being their biggest win at the tournament since 2008.

It wasn’t a perfect performance though‚ with centre Wandisile Simelane earning a yellow card for tripping – the exact same offence that earned him yellow in game one against France.

The Junior Boks were also not pressurised on defence and when they were‚ they conceded two tries.

If their semi-final opponents are England or New Zealand (that will only be finalised on Thursday evening) they will have to sharpen their defence.

But that is nit-picking what was a comprehensive display‚ which demonstrated the vast talent this country has coming through its ranks every season.

Lock Hendre Stassen was colossal in the set piece and loose play; scrumhalf Embrose Papier gave superb direction from the base of rucks with both hand and boot while centre Damian Willemse played like an auxiliary flyhalf.

Coach Chean Roux has done a good job of allowing his side the freedom to play with flair‚ which comes naturally to the likes of Willemse and wing Gianni Lombard‚ but without forgetting the basics of set piece dominance and tactical nous.

The pack was immense on the day‚ shoving the Pumitas off the ball and earning four scrum penalties while nicking seven Argentinean lineouts.

This was a different team to the SA side that looked tentative and edgy against France in their opener.

Initially SA’s tries came from the forwards with hooker Johan Grobbelaar scoring the opening brace to set the tone for what would be a long afternoon for the Pumitas.

Simelane’s yellow allowed Argentina to gain a small foothold in the game when centre Felix Luna barged over.

SA managed the period well though‚ and scored a fine breakaway via fine interplay between Willemse and Lombard to settle nerves and keep the Pumitas at arms-length.

Before halftime Willemse and Kings wing Yaw Penxe had secured the bonus point with two further tries and after halftime things fell apart for Argentina.

The Junior Boks scored six tries in the second stanza. No 8 Juarno Augustus powered his way over for his fourth try of the tournament almost from the restart.

And the tries kept raining down on Argentina as with Papier‚ Lombard‚ fullback Manie Libbok and replacements Francois de Villiers and Jeanluc Cilliers adding to the scoresheet.