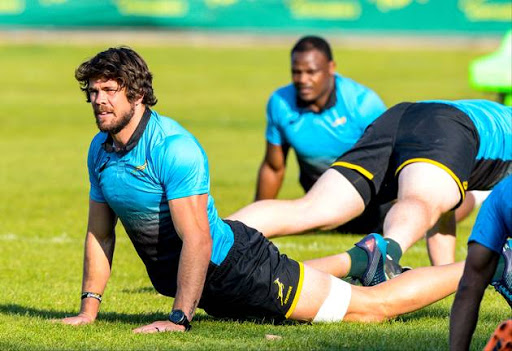 Adriaan Strauss‚ who skippered the Springboks during their painful 2016 season‚ believes that the lessons learned and mistakes made last year will ensure better performances in 2017.

The Springboks begin their international season against France at Loftus Versfeld on Saturday‚ coming off eight losses in their 12 Tests last season‚ including losing their last four Tests of the year.

One of those defeats was against Italy in Florence. By any standard losing 66 per cent of games should have been enough to have ushered in a new coaching staff.

Strauss had the grace to call time on his Test career‚ but coach Allister Coetzee soldiers on into a new season‚ albeit with some new faces in the back room.

Winning the French series‚ which includes further Tests at King’s Park and Ellis Park‚ is non negotiable for Coetzee to prolong his stay as Bok coach.

The coach has made positive noises about improved cooperation with Super Rugby franchises that has led to a flow of intelligence and understanding that was not there in 2016.

And Strauss agrees. “I’m very positive about the Springboks this season and seeing them improve‚” Strauss said.

“I’m excited about their potential as long as they lay a good foundation against the French in this series.

“Last year was obviously not a good one in terms of results but it was necessary for those setbacks to happen in some ways.

“By necessary‚ I mean that it forced South African rugby as a whole to re-look at the way we do things. It opened minds to introspection at all levels of the game‚ which we needed to do.

“That led the coaching and fitness indabas and we need to follow that through in the coming months and years.

“One of the things that emerged last year was the realisation that the Springboks won’t always be a world force just because of our reputation or the natural talent we have in the country.

“We need an identity about the way we want to play because last year we fell short and we have been falling behind the professionalism of other countries.

"Across the globe other countries are improving both domestically and internationally‚ and we have started a process to do the same.”

Strauss‚ while still playing for the Bulls in Super Rugby‚ will spend a week playing for the Africa Pacific Dragons (APG) at the Beachcomber World Club 10s in Mauritius.

The tournament is an exciting new feature on the rugby landscape and sees eight elite professional teams‚ including Harlequins from England‚ the Bulls and Cheetahs from SA and the Western Force and Brumbies from Australia‚ playing in the two-day event.

“To be honest‚ I’m not as clued up with how 10s works as I probably should be‚ but I’m looking forward to playing and learning about it‚” Strauss said.

“I'm competitive by nature‚ and so are all the players in the elite teams competing‚ so I know that when we get there and are thrown into a match situation‚ those competitive juices will flow.

“We all want to win and while we are playing it will be serious on the pitch. But I suppose that off the field‚ it will be a slightly more relaxed environment.

“I believe we are all staying at the same hotel‚ and that will give us a chance to mingle socially – something that hardly happens in professional rugby these days.

“It’s also going to be different for me‚ because for eight years I was preparing for a Test match series in June‚ and now I’m heading off to Mauritius.

"Obviously the stakes are not as high at the 10s‚ but it’s still going to be hugely competitive.”