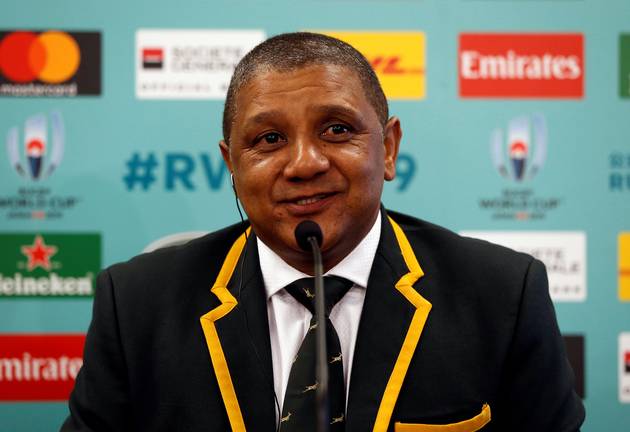 The Springbok rabble that limped out of Cardiff last year after a record eighth loss of the year have been replaced with a vibrant squad that is unrecognisable from eight months ago.

Whether it was entirely Coetzee’s call is a moot point. There has clearly been a shift in mentality and attitude by the players. Last year their passiveness on defence and the fog with which they played has been lifted. Saturday’s 37-15 win over France clinched the three-match series 2-0 after winning 37-14 at Loftus a week earlier.

The Boks have taken care of business‚ and did it without being boring men in grey suits. Their business was conducted as if they were a Silicon Valley tech company‚ hatching their plans in chill rooms and delivering the end product wearing jeans and sneakers. There is new focus and confidence about the 2017 Boks‚ which stems from excellent preparation.

But as Coetzee rightly pointed out‚ they are far from the finished product.

They’re still mixing the dry and wet ingredients that will only be put in the oven during the Rugby Championship. Last year the Boks slumped to a record 57-15 loss against the All Blacks at King’s Park‚ and on Saturday at the scene of one of his worst days in rugby‚ Coetzee referenced that painful experience as a warning that the team has to keep improving. “It was an unbelievable performance and I’m proud of the way this team has grown over nine months‚” Coetzee said.

Sport Minister Thembelani 'Thulas' Nxesi has congratulated the Springboks after their impressive 37-15 win over France at Kings Park Stadium on ...
Sport
4 years ago

“We went through a painful experience (against the All Blacks) but it’s nice to witness what was an outstanding performance (against France). “But it’s not perfect yet. We still have a lot of work to do and we are following a process.

"However‚ I’m pleased with all aspects of the game – I’m proud of the set piece‚ the attack and particularly the way we defended in that second half.” France set up a camp that Napoleon Bonaparte would have approved of‚ inside the Bok 22 for most of the third quarter.

Yet they were repelled time and again. One passage went 27 phases before the Boks won a turnover.

France came back for another 11 phases and were turned over.

And they weren’t done‚ returning for another skirmish of 14 phases‚ which the tireless and organised Springbok defence kept at bay. Coetzee rightly pointed out that this period of dominance without the ball was due to the players’ attitude.

Kolisi nails down his Springbok spot

Like many players in the Springboks setup over the past 12 months‚ Siya Kolisi was not guaranteed a place in the squad‚ let alone in the starting XV ...
Sport
4 years ago

But it was also down to a defensive system that the players both understand and believe in. All the attitude in the world is worthless if a defender is out of position. The Boks threw a blanket over the French attack in that crucial period and won the game. “We were tested by France’s physicality and in the first 10-15 of the match that beat us at just about every collision‚” Coetzee said.

“But the players never panicked and eventually we got on top of them and started winning the physical battle. “The team plays for each other and that was shown in the defence tonight.

"They do it for each other. The system does not tackle‚ the players in the system need to make the tackle.

"The reaction time of players‚ to get back on their feet and to get back in the position again‚ that was very rewarding to see. “We have to play with intensity‚ to bounce off the ground‚ reload and get back in position.”