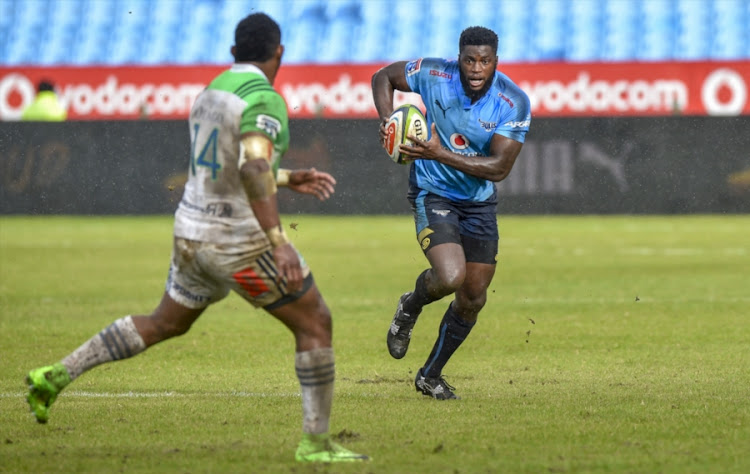 Waisake Naholo and Jamba Ulengo (R) of the Bulls during the Super Rugby match between Vodacom Bulls and Highlanders at Loftus Versfeld on May 13, 2017 in Pretoria, South Africa.
Image: Christiaan Kotze/Gallo Images

Bulls coach Nollis Marais will wait until later in the week before deciding on whether to play wingers Jamba Ulengo and Travis Ismaiel in their penultimate Super Rugby clash against the Southern Kings at Loftus on Saturday.

The two wingers‚ who missed last weekend’s impressive win over the Sharks in Durban‚ started training on Monday and they are in contention for places in the starting line-up or either on the bench if they prove their fitness.

Springboks fly-half Handre Pollard‚ who missed most of the season with an ankle injury‚ also returned to training this week but is unlikely to be risked this weekend against the Kings.

The Stormers will go into their penultimate Super Rugby pool match against the Sunwolves this Saturday without flank Rynhardt Elstadt.
Sport
4 years ago

The other uncertainty on the rooster this weekend is flyhalf Tony Jantjies‚ who was replaced early in the match against the Sharks last weekend with a rib injury.

While there is hope that the above quartet could still recover in time to play a part against the improving Kings this weekend‚ Namibian captain and flanker Renaldo Bothma is definitely out and faces a lengthy period of time on the sidelines.

They may be Super Rugby's Africa conference winners but the Lions' job is far from done, says coach Johan Ackermann.
Sport
4 years ago

Bothma‚ who was banned for four weeks earlier in the season for a dangerous tackle against the Sunwolves‚ will miss the remainder of the campaign after he suffered a fracture on his arm in the win over the Sharks last Friday.

Flanker Roelof Smit’s is another Bulls player who will miss the remainder of the Super Rugby campaign after scans revealed that he had a tear in his MC ligament in the knee and would be out for six to eight weeks.