All Blacks under pressure going in to decider 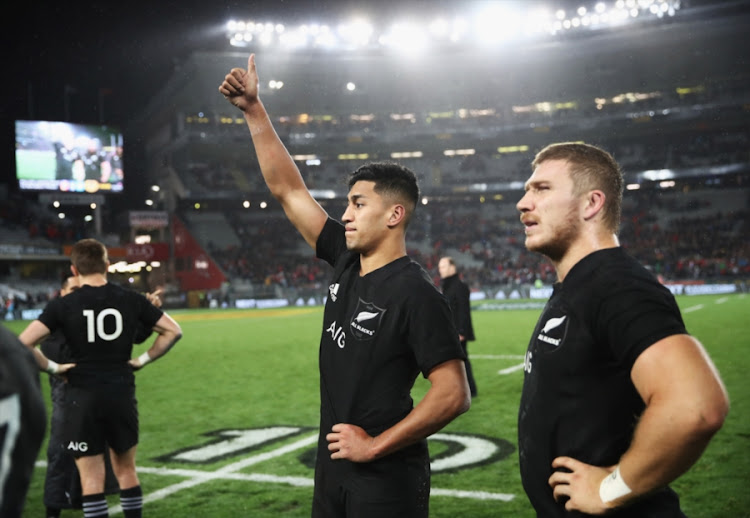 Rieko Ioane of the All Blacks gives the thumbs up after the first test match between the New Zealand All Blacks and the British & Irish Lions at Eden Park on June 24, 2017 in Auckland, New Zealand.
Image: Phil Walter/Getty Images

The All Blacks will go into Saturday’s deciding third Test against the British & Irish Lions at Eden Park as favourites‚ but they have seldom been under so much pressure.

The Lions’ series was supposed to be a straightforward coronation of the All Blacks’ status as the greatest rugby team ever.

Instead the series has turned into a dogfight that has made the mighty All Blacks appear human after years of supreme dominance.

Since losing three Tests in a row to the Springboks in 2009‚ New Zealand rugby‚ until this series at least‚ has streaked ahead of the chasing pack.

The Lions were expected to be the final confirmation that this decade’s All Blacks are the greatest of all time.

Western Province Rugby have locked in three senior Springboks for another two years to underline their commitment to their goal of winning Super ...
Sport
4 years ago

They might still be‚ but if they lose a Lions series for only a second time‚ it would seriously dent that claim.

After losing 32-29 to the Boks in Hamilton in 2009‚ which followed two earlier defeats in SA that season‚ the All Blacks set about working towards a period of world dominance that is unprecedented in rugby‚ and arguably in all sport.

They changed their approach and honed their skills in terms of tactical kicking and conditioning that saw them surge ahead.

Naturally once the gap was established‚ the chasing pack started closing it. Ireland and England‚ in particular‚ are close.

The Lions’ performances underline that closure and last week’s win was further evidence that the All Blacks are no longer invincible.

The Stormers will go into their penultimate Super Rugby pool match against the Sunwolves this Saturday without flank Rynhardt Elstadt.
Sport
4 years ago

In fact‚ the Lions squandered three gilt-edged try-scoring chances in the first Test and paid the price.

Last week‚ after Sonny Bill Williams’ 25th minute red card‚ it was the Lions who dropped their intensity and lost their shape – especially in the third quarter.

That allowed the All Blacks to stay in the game as a slew of penalties flowed their way.

The Lions nearly squandered their numerical advantage‚ but rallied with two late tries to secure a famous victory.

The All Blacks were a man down‚ but on the balance of the two Tests‚ the Lions are rightfully at 1-1 in the series.

Yet the summit of immortality for these Lions players is still a long way off considering last week’s win was the All Blacks first home loss in 47 Tests and eight years.

On the day when Stormers flyhalf Brandon Thomson was given permission to quit Western Province‚ skills coach Paul Feeney hinted that teenage ...
Sport
4 years ago

But the ignominy of an unwanted kind of immortality is close for the current NZ team while the Lions have far less pressure on them.

It’s all on the home team. The All Blacks are cornered and will leave everything on the Eden Park pitch on Saturday to ensure they don't become only the fourth NZ side to lose a home series after predecessors lost to the 1937 Springboks‚ the 1971 Lions and the 1994 French.

The All Blacks haven’t shied away from publicly confronting their own shortcomings in this series‚ the most notable being Williams’ red card.

They have also talked about their poor attack during the series‚ and it has been uncharacteristic to see the All Black back division so shackled.

Part of the credit of course goes to the Lions‚ whose immense line speed and supreme tackle efficiency has shut the All Blacks down and reduced them to scoring only three tries in the series.

They may be Super Rugby's Africa conference winners but the Lions' job is far from done, says coach Johan Ackermann.
Sport
4 years ago

But NZ has not been the fluid attacking machine we are used to seeing due to their own shortcomings as well. Injuries have forced backline reshuffles and allowed from creeping doubt where none previously existed.

The unspectacular but vital backline fulcrum Ryan Crotty was injured minutes into the first Test and so was inspirational and deadly fullback Ben Smith.

When Williams was sent off in Test two‚ the All Blacks had only had Israel Dagg as an experienced outside back on the pitch.

And for some reason Julian Savea is persona non grata in the set up‚ adding suspicion that all is not well inside planet All Black.

There is so much talent there‚ but as a unit they have zero playing time together.

The second test loss to the British and Irish Lions has ratcheted up the pressure on the All Blacks ahead of what promises to be a historical series ...
Sport
4 years ago

The fact that this is the biggest Test match a team can play outside of the World Cup final adds to the pressure for the All Blacks in particular.

They are triple world champions‚ playing at home with access to more rugby talent in the Auckland suburb of Mangere East than most nations can find in their entire country. Losing is unthinkable.

A month ago‚ when the Lions crashed to a loss against the Blues‚ the belief in All Black superiority seemed justified.

But here we are four weeks on‚ and the Lions are in fine shape on and off the field going into the decider. NZ are hardly in a crisis‚ but they are at the edge of a precipice where few‚ if any of the current All Blacks‚ have been before.