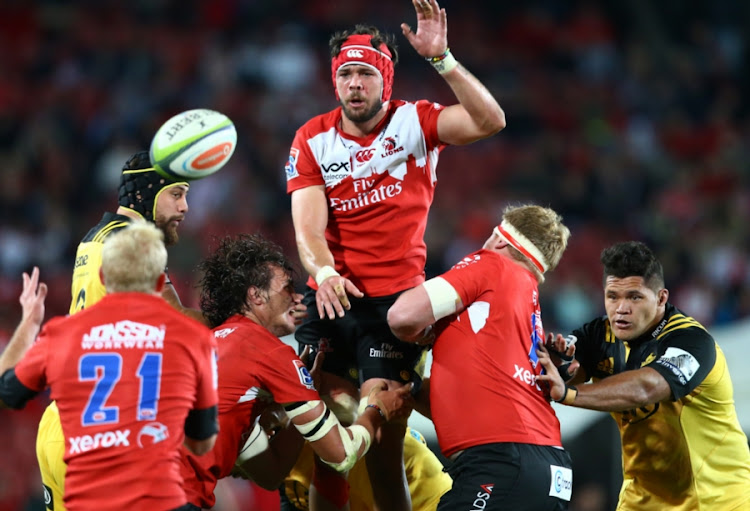 A file photo of Warren Whiteley of the Emirates Lions in the lineout during the Super Rugby match between Emirates Lions and Hurricanes at Emirates Airline Park on April 30, 2016 in Johannesburg, South Africa.
Image: Steve Haag/Gallo Images

The Lions have a big job to do this weekend in Durban if they have any hope of finishing with the most points across all of Super Rugby’s logs‚ which would ensure home advantage for the duration of the play-offs.

The top two sides are guaranteed the top two seeds going into the play-offs but the Lions would prefer not to travel to Christchurch for a final.

Last year the Lions missed out on the overall top place in the standings and traveled to Wellington to face the Hurricanes in the final after impressive home play-off wins against the Crusaders and Highlanders.

They never really emerged from the blocks in the final and were left to rue what might have been had the showpiece been played at Ellis Park.

Swys de Bruin was on Tuesday officially unveiled as the next coach of the Lions and Golden Lions.
Sport
4 years ago

This year there is a good chance history could repeat itself after the Lions took a ‘B team’ to Argentina to play the Jaguares earlier this season‚ and lost.

They did exactly the same in 2016 and it cost them a better shot at the title. So they will be hoping the Hurricanes can do them a favour on Saturday.

By the time the Lions take the field at King’s Park‚ they will know if they can still finish ahead of the men from Christchurch or not.

And then it will be up to them to finish the job. The Crusaders are in action earlier in the day in a big all-New Zealand derby against the Hurricanes in Wellington.

As far as the Lions are concerned‚ that is great news because the Hurricanes have a lot to play for against the Crusaders.

Kings priming themselves for a grandstand finish before Super Rugby exit

In a perfect world‚ the Southern Kings and the Cheetahs should have been gifted the prime time 5pm kick-off slot on Saturday to mark their Super ...
Sport
4 years ago

Defeat would mean the Hurricanes would have to travel to South Africa to face the Stormers at Newlands in the quarterfinal while a win would mean a shorter trip to Canberra to take on the Brumbies.

From a travel and form perspective‚ the Brumbies clash is a more appealing assignment for the defending champions.

The fact that they’ve thrown all their returning All Blacks into match suggests that coach Chris Boyd doesn’t fancy a trip to Cape Town this season.

It’s an impressive cavalry to throw at the Crusaders who have also brought back some All Black stars‚ but interestingly also rested key players.

Kings vs Cheetahs is not the end‚ but the beginning

The Southern Kings and Cheetahs‚ by the quirk of Super Rugby’s draw‚ which is calculated at great cost by a Canadian company‚ have inevitably been ...
Sport
4 years ago

The entire All Black front row of Owen Franks‚ Cody Taylor and Joe Moody have been omitted from their starting lineup after medical advice.

All Black doctors suggested that the trio‚ who started each of the three Tests against the Lions‚ should be rested.

But the Crusaders will include fullback Israel Dagg‚ No 8 Kieran Read and locks Scott Barrett and Luke Romano‚ who were involved against the B&I Lions.

The omission of the three key All Blacks swings the balance of the match in favour of the Hurricanes.

And perhaps the overall title the way of the Lions?