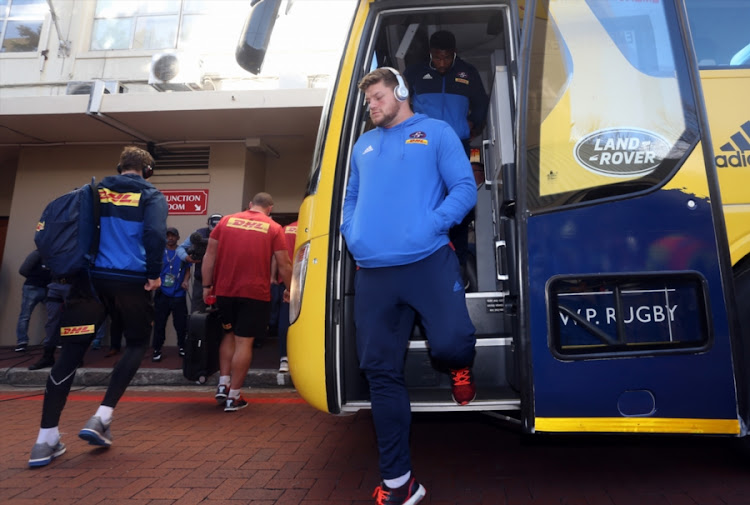 Oli Kebble of the Stormers during the Super Rugby Quarter final between DHL Stormers and Chiefs at DHL Newlands on July 22, 2017 in Cape Town, South Africa.
Image: Carl Fourie/Gallo Images

“When I signed for Glasgow I never expected I’d still be playing rugby in Bloemfontein and Port Elizabeth; it’s interesting.”

That was the reaction of departing Stormers and former SA under-20 prop Oli Kebble when discussing his move to the Glasgow Warriors. Kebble‚ 25‚ was referring to the Pro 12 tournament‚ in which Glasgow play.

That competition will include the Cheetahs and Southern Kings from September‚ and Kebble unexpectedly‚ will come up against some old foes despite being 11000km apart.

He joins the Scottish club next week. “I hope more SA teams start playing in Europe because it is much easier in terms of time zones and might even be more lucrative with regards to the TV rights‚” Kebble said.

Why the Hurricanes seem to have the Lions' number

The last thing the Lions should do in the build-up to their Super Rugby semi-final against the Hurricanes at Ellis Park on Saturday is look at their ...
Sport
4 years ago

“It’s exciting though and I look forward to seeing how it all works out in the coming months.”

As the son of Springbok prop Guy [capped four times in 1993-94]‚ the younger Kebble dreamed of being a senior Springbok.

At his relatively youthful age‚ it is still a possibility‚ but Kebble has decided to throw his lot in with Scotland.

The Stormers front ranker‚ who was a member of the SA Under-20 team that won the 2012 World Championship on home soil‚ has decided to seek international recognition in Scotland‚ just as WP Nel and Josh Strauss did before him.

Kebble hasn’t always held down a regular starting berth at the Stormers and his Springbok ambitions‚ that were so high in the immediate aftermath of 2012‚ have waned.

“I have signed a three-year deal with the Scottish Rugby Union and my intention is to commit my future there. I hope to get a passport and see where that leads me‚” Kebble said.

Stormers coach Robbie Fleck and his assistants are set to broaden their professional skills with a long road trip to study other professional setups.
Sport
4 years ago

“It was a big decision to take but I felt it was time to make a change in my career. I’ve done about all I can for the Stormers.

“I want to get out and see the world and try some new experiences while I’m still relatively young.

“It’s difficult to say I was frustrated in SA because there are a lot of good players in my position.

"I never got an opportunity for the senior Boks‚ but some guys came through who have been playing great rugby.”

The giant 124kg loosehead has already had a taste of life abroad by doing his A Levels at Dulwich College in London‚ playing a season at Parisian second division club Mont-de-Marsan and also enjoying a short stint at London Irish’s Academy.

He wasn't even supposed to take the penalty, but Ruan Combrinck put his foot down and won with the Lions' last throw of the dice in their Super Rugby ...
Sport
4 years ago

He also believes that he needs a new challenge after Super Rugby’s expansion‚ which appears to have diluted the strength of the tournament.

“I’ve developed well as a player over the past five years. It has been a great honour to play for the Stormers and something I never expected as a schoolboy‚” Kebble said.

“It’s difficult to convincingly say the standard of Super Rugby has dropped because I started as a 20-year-old and have also grown into the competition.

“But I definitely think it would be in Super Rugby’s interests to contract to a smaller competition – perhaps back to 12 teams – to really concentrate all the playing talent.”