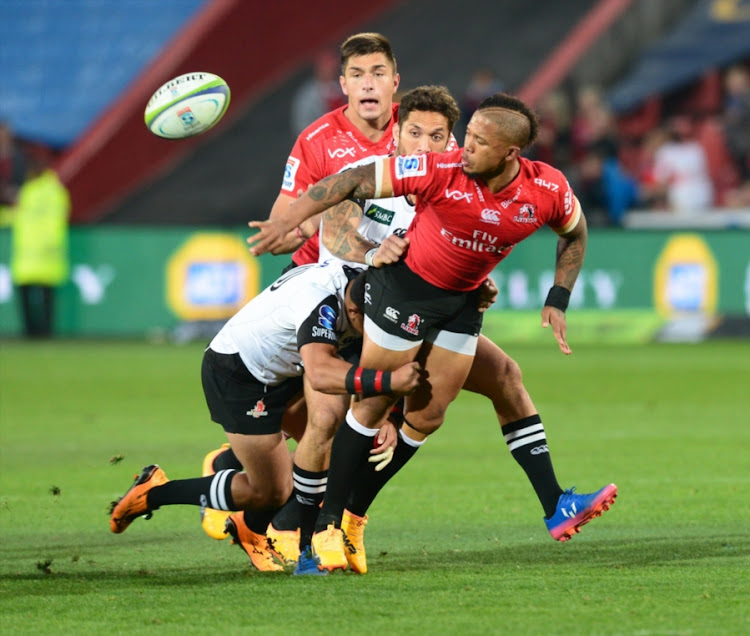 Jumpei Ogura of the Sunwolves tackles Elton Jantjies of the Lions during the Super Rugby match between Emirates Lions and Sunwolves at Emirates Airline Park on July 01, 2017 in Johannesburg, South Africa.
Image: Lee Warren/Gallo Images

Hurricanes coach Chris Boyd says Elton Jantjies is the best flyhalf in South Africa and his absent performance in the quarterfinal against the Sharks was nothing more than a bad day in the office.

Jantjies will play a critical role for the Lions in Saturday's semi-final against a Hurricanes side that has made two changes from the side that beat the Brumbies in Canberra.

Hooker Dane Coles makes his first start of the season while Vince Aso replaces Jordie Barrett at outside centre.

Julian Savea moves to the bench while Cory Jane drops out of the match-day 23 altogether.

New Zealand rugby has set a high standard over Super Rugby’s 21-year history in the professional era and it’s a curve that continues to go up.
Sport
4 years ago

“Elton's a quality footballer and probably the best flyhalf in the country at the moment. He's got a bag of tricks we've got to watch out for and he's a potent force for them‚” Boyd says.

“We were wondering if they were going to bring back their inside centre (Rohan Janse van Rensburg but the fact they've got an unchanged side is not a surprise.

"Each team has got motivating factors and Johan Ackermann has done a wonderful job with the Lions. I also said the Lions didn't quite get their preparations right for the quarterfinal.

"They wouldn't have taken the Sharks lightly but the Sharks played very well.”

Instead of assessing the approaching storm‚ in form centre Harold Vorster and his Lions teammates are more focused on getting their house in order.
Sport
4 years ago

Boyd isn't a coach who is big on milestones but is aware of how special Coles's 100th match is going to be.

Milestone games for the Hurricanes haven't always gone according to plan as Victor Vito's 100th game coincided with the Canes winning last year's final against the Lions while Savea's 100th match saw the defending champions fall to the Chiefs.

The Canes have also been without their standout hooker and captain for large parts of the season through concussion and Boyd was visibly happy to have Coles back.

Coles also missed the landmark shared British and Irish Lions series where his dynamic and revolutionary support play at wing was sorely missed.

Why the Hurricanes seem to have the Lions' number

The last thing the Lions should do in the build-up to their Super Rugby semi-final against the Hurricanes at Ellis Park on Saturday is look at their ...
Sport
4 years ago

"It'll be part of the motivation because the boys will want to do it for Colesy. He's a special character in our environment.

"We respect his 100th game and applaud what he's done. We know there's a lot more to come but we want to see him through in the right way‚” Boyd said.