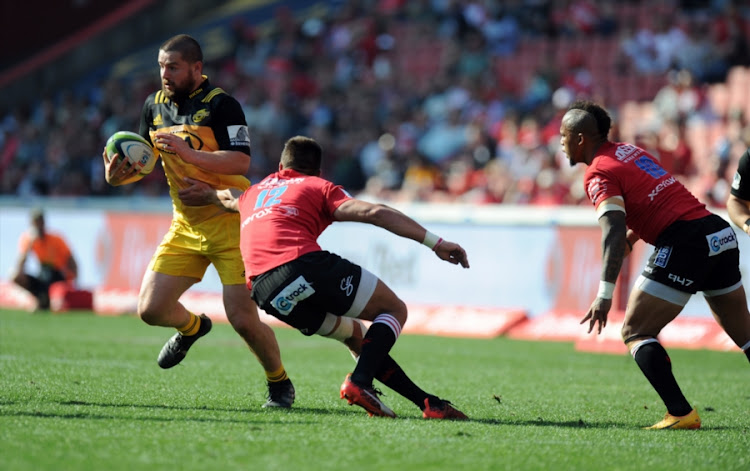 Harold Voster and Elton Jantjies of Lions in action with Dane Coles of Hurricane during the Super Rugby, Semi Final match between Emirates Lions and Hurricanes at Emirates Airline Park on July 29, 2017 in Johannesburg, South Africa.
Image: Gallo Images

Lions will host a home Super Rugby final against Crusaders on Saturday after they turned the tables to demolish highly fancied Hurricanes 44-29 at Ellis Park in Johannesburg on Saturday.

This win, where they scored six tries to Hurricanes’ four, was the Lions’ 15th in succession this season since they were surprisingly beaten by the Jaguares in Argentina during round three.

Elton Jantjies opened the scoring for the home side from a penalty kick but their slender lead was short-lived as they were made to pay for sloppy defense work two minutes later by an unconverted try from TJ Perenara.

It got worse for the Lions after nine minutes when their defense was once more breached which led to a try by Wes Goosen, who ran all the way to score the second try for the Hurricanes. Jordie Barrett converted.

Hurricanes further increased their lead in the 20th minute through the boot of Jordie Barrett to increase their lead by 12 points after Lionel Mapoe was caught on an off-side position.

Kwagga Smith produced a try saving moment when he tackled Jordie Barrett for touch on the edge of the try-line to save the Lions who were once again exposed at the back after 25 minutes.

Hurricanes’s lead increased to 19 points in the 28th minute when Ardie Savea scored touched down to allow Beauden Barrett to convert as they took full control of this semi-final clash.

On the stroke of half-time, Lions brought some respectability to the score-line when Jacques van Rooyen powered through the watertight Hurricanes defence to score a try that was easily converted by Jantjies.

The Lions showed intent after restart and they were duly rewarded after 45 minutes when Ross Cronje sneaked through the Hurricanes defence to score a try and Jantjies registered his second conversion of the afternoon.

In the 54th minute, Lions tied the score at 22-22 through a forceful try by Malcolm Marx that was unconverted by Jantjies who watched in agony as his effort ricochet off the poles.

Then Hurricanes regained the through Ngani Laumape who scored a try that was converted by Jordie Barret as this clash exploded into a see saw encounter.

Hurricanes increased their lead from a penalty by Jordie Barrett and it shortly was followed by one from Jantjies which was a result of obstruction which led to a yellow card for Beauden Barrett.

17 minutes from time, Lions scored a try through Harold Voster following individual and clever attacking play and his effort was converted by Janjties who gave an improved kicking performance.

In the last fifteen minutes, the Lions were enjoying good momentum and they increased their lead with a try by Jantjies and he stood up to convert himself in the 69th minute.

Four minutes from the stadium bell, Kwagga Smith put matters beyond any doubt when he scored the Lions’ sixth try of the afternoon that was converted by Jantjies.