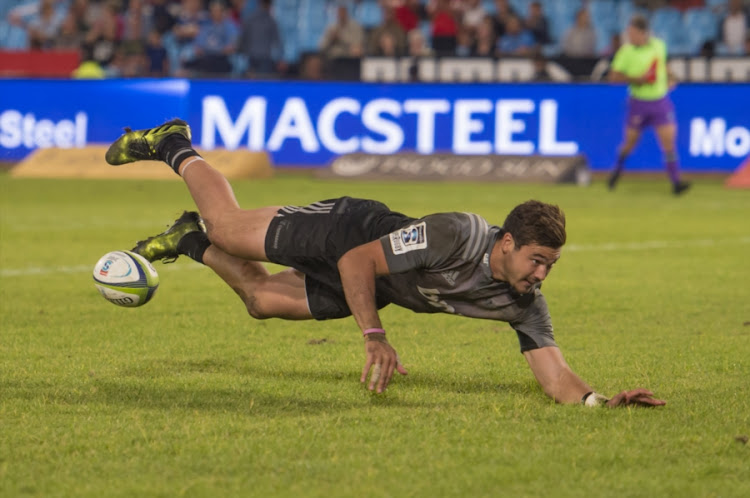 David Havili of the Crusaders scores a try during the Super Rugby match between Vodacom Bulls and Crusaders at Loftus Versfeld on May 06, 2017 in Pretoria, South Africa.
Image: Anton Geyser/Gallo Images

Like most successful teams‚ the Crusaders have had many bites at the championship cherry.

There have been other stabs at glory that haven't been successful‚ with some being controversial.

Here are the Crusaders play-off bomb-outs of the past 10 seasons in South Africa alongside their sole success.

The Crusaders hadn't lost a play-off game since their pulsating 47-33 2004 final loss to the Brumbies but the penny had to drop at some point.

The ascendant Bulls were fresh from their 92-3 evisceration of the Reds and their machine was purring.

What is it that Mo'unga brings to the plate that will ask questions of Jantjies's play-making abilities?

With the way the Crusaders are set up‚ it's difficult to pin their success on an individual.
Sport
4 years ago

While the Highlanders won a semi-final in Cape Town in 1999‚ the Highveld was a different story and so it proved.

The Bulls laid out the perfect play-off rugby template by shutting out the dangerous side while not conceding a try at the same time.

The script would play out two years later.

This Bulls side shed its 2007 inhibitions and wanted to outscore teams.

They were irresistible and a quality Crusaders outfit could do nothing to stop them.

Morne Steyn was in his 2009 element with his game management and kicking while Fourie du Preez provided a masterclass at scrumhalf.

Current All Black captain Kieran Read was well established but not even he could stem the Bulls tide.

After weeks of speculation‚ the Cheetahs and the Southern Kings have formally been confirmed as participants in the Guinness Pro 14 after the Celtic ...
Sport
4 years ago

Rugby hit Soweto for the first time and the result didn't change.

The Bulls machine was at its peak and unstoppable.

Steyn and Du Preez were again at the heart of the decimation as the Crusaders again failed to live with the altitude air and the intensity of the Bulls.

The smaller Orlando Stadium provided an atmosphere not seen in South African rugby as a combination of vuvuzelas and a dominating performance consigned the Crusaders to a third straight play-off loss against the Bulls.

Asking the Stormers to win a play-off is like asking the sitting president to vacate his position.

It's not going to happen.

This was most probably the best assembled Stormers unit to lose a play-off after the 1999 Men in Black side and they went about it in the worst way possible.

It was a proverbial home game for the Crusaders‚ who had Dan Carter to thank for a sublime performance.

Tries from Sean Maitland and Robbie Fruean sealed the deal but the Crusaders burnt too much fuel.

They slipped up in the final in Brisbane the following week.

Play-off sanity returned when the Crusaders came back to the Highveld after a six-year hiatus.

It was a resumption of normal service as Todd Blackadder's reign as coach was ended quietly.

It proved how difficult it is to come to the Highveld to win a play-off game even though the All Black have long mastered the art of winning in Johannesburg and Pretoria.

Clearly‚ the Super Rugby championship pressure is of a different measuring unit.