What is it that Mo'unga brings to the plate that will ask questions of Jantjies's play-making abilities? 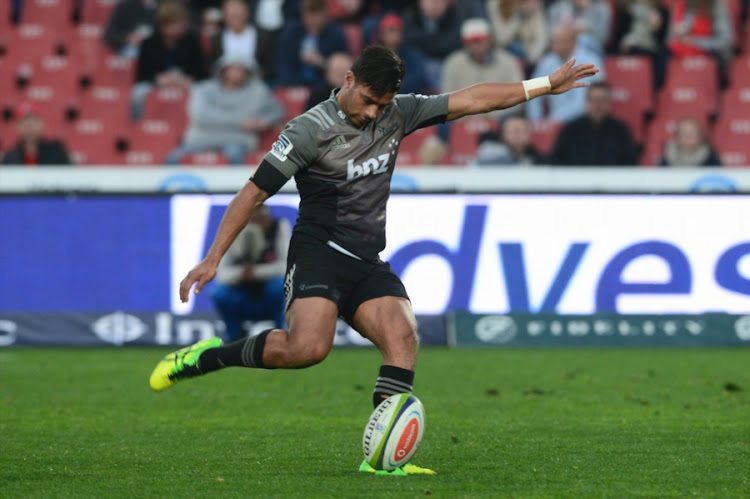 Richie Mo'unga of the Crusaders during the Super Rugby match between the Emirates Lions and Crusaders at Emirates Airline Park on July 23, 2016 in Johannesburg, South Africa.
Image: Lee Warren/Gallo Images

With the way the Crusaders are set up‚ it's difficult to pin their success on an individual.

However‚ their run to the final has been timed impeccably with Richie Mo'unga's coming of age as a player of serious reckoning.

When celebrated playmakers like Andrew Merhtens and Daniel Carter too off the Crusaders conveyor belt‚ it's going to be difficult to fill those boots.

The former was at the forefront of the treble the South Island franchise secured at the turn of the Millennium and another title in 2002.

Mo'unga wasn't even flickering on the radar when the Crusaders beat the Waratahs 20-12 at the sadly now defunct Lancaster Park.

Crusaders licking their lips for Lions

The Canterbury Crusaders started their long trek to South Africa in search of their eighth Super Rugby title with Kieran Read and Owen Franks on the ...
Sport
4 years ago

Only Kieran Read and Wyatt Crockett remain from the Robbie Deans-coached side as Todd Blackadder's tenure became perennial bridesmaids to the Australian teams that bested them 2011 and 2014.

With Beauden Barrett‚ Aaron Cruden and Lima Sopoaga being the first-choice All Black pivots‚ Mo'unga has been allowed to develop at his own pace with startling effect.

Goalkicking was an issue but that seems to be sorting itself out.

However‚ he's far from the accuracy displayed by the Barrett brothers and Damian McKenzie‚ who at some point will be asking questions about his All Black credentials at flyhalf.

What he does have over McKenzie will be Super Rugby final experience‚ which normally comes in handy when it comes to All Black selection.

The strong Crusaders pack and whether they go about their business legally has allowed Mo'unga to blossom.

The one time their pack was checked‚ it led to the Hurricanes loss that's subjected them to the trip across the Indian Ocean.

The Lions pack hasn't been the 2016 vintage but their second half come-uppance allowed Elton Jantjies to take charge in the best way he knows.

It was clear Jantjies shrugged off his forgettable quarterfinal showing against the Sharks to spur the Lions into their first home final.

Jantjies will pose a challenge Mo'unga has seen for the best part of the season through the excellent New Zealand flyhalves.

Whether altitude will be an issue remains to be seen as the Crusaders made light work of the Bulls and the Cheetahs in Pretoria and Bloemfontein respectively.

The Lions and their Ellis Park fortress will present a different challenge. The Lions are fitter‚ faster and better than their northern and central neighbours.

This is something Mo'unga will realise very quickly but his role in the Crusaders' 2017 resurgence can't be understated.