Francois Pienaar expects ‘one of the greatest finals ever’ 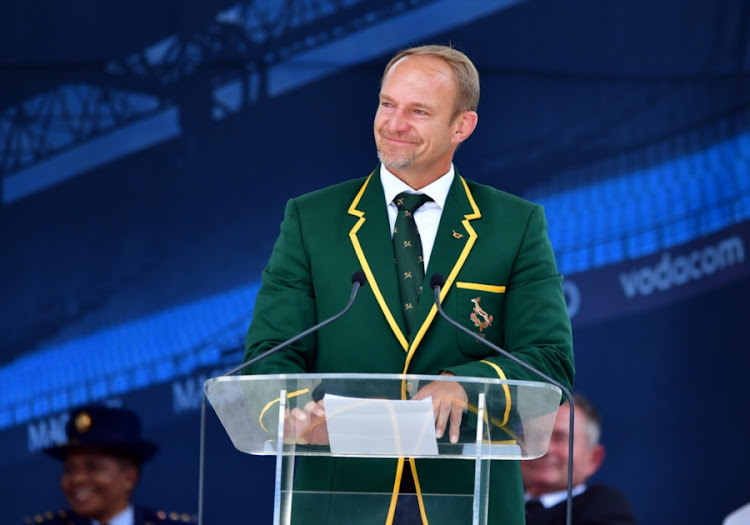 Former Lions and Springbok skipper Francois Pienaar believes that Saturday’s Super Rugby final between the Lions and Crusaders could be one of the greatest of all time.

Pienaar captained Transvaal (now the Lions) to the 1993 Super 10 title‚ when they beat an All Black-laden Auckland at Ellis Park in a tight battle. It was one of four titles‚ including the Currie Cup‚ that Transvaal won that season and was in the middle of a golden era for the team.

The Lions circa 2017 are also on the threshold of a golden era‚ and victory over the Crusaders would usher them over edge and into elite company as only SA’s second Super Rugby champions.

“This is amazing for the Lions especially when you consider the style of how they came back in the semifinal (from 22-3 down to beat the Hurricanes 44-29)‚ against quality opposition to reach the final‚” Pienaar told TimesLIVE.

“Their run has gripped the country.

“There is a feeling that the outcome of Saturday’s match has been scripted for the Lions but finals are strange encounters.

“Some of those Lions players (and Crusaders players) will be playing in front of 61000 people for the first time. A packed Ellis Park has a hell of an atmosphere and players have to make sure it doesn’t overpower them mentally.

“It will be noisy and there will be a sea of red‚ and the Lions must drink that in‚ but at the same time they have to remain focused on the business at hand because they’re up against the best team in the history of Super Rugby.

“The match will be about fine margins and the team that takes their chances will win. If you don’t take them when they arrive‚ you will lose – it’s that simple.

“How the players will react under that pressure will be key because it is daunting. I don’t know the answer to that‚ but I think the Lions players will cope and enjoy it.

“I like the home ground advantage that the Lions have and I suspect the altitude will be a factor as well‚ but in the final the adrenalin pumps more than usual.

“Sitting in the change room before kickoff is one of the most incredible feelings you can have and I miss it every time I’m at a big game. They players should soak it in‚ though‚ because it’s something to remember.

“Finals are often boring because so much is at stake but I suspect that it won’t happen in this match. These are two positive teams and I think we might see one of the greatest finals ever.

“The Lions have started badly in the last two matches and hopefully that won’t happen again because this Crusaders team will be hard to peg back with a good lead.

“The Crusaders will also try and unsettle the Lions backline‚ and Elton Jantjies in particular. They are really going to try and get under his skin early on‚ but hopefully he settle in quickly.”

Pienaar recalled how the 1993 Lions overcame a powerhouse Auckland and also laid the foundations for the Springboks’ 1995 World Cup success. Perhaps the Lions of 2017 could be doing the same for the Boks at Rugby World Cup 2019.

“The whole of 1993 was such a dream year for us‚” Pienaar said. “We won everything there was to win and to beat the Auckland team‚ which was probably the best Auckland team ever‚ was special.

“Just read the names on their teamsheet – Olo Brown‚ Sean Fitzpatrick‚ Craig Dowd‚ Robin Brooke‚ Zinzan Brooke and Michael Jones‚ just in the pack. They also had Grant Fox‚ Lee Stensness‚ Eroni Clarke‚ and Va’aiga Tuigamala on the wing. It was a formidable team.

“It was an incredible day and a match I still remember vividly. We started well and they came back strongly and we managed to get over the line by 20-17.

“It was pointed out to me on our 1995 Boks Whatsapp group that the Lions are hosting the final again in 2017‚ so hopefully that’s a good omen and it’s the year of the Lions again.

“This Lions team is nicely balanced in terms of their style and players. They have a great pack of forwards‚ which is the foundation of their success.

“The bulk of the 1995 World Cup-winning Springboks came from the Transvaal team of the era (which won the Currie Cup in 1993 and 1994 and reached the 1995 Super 10 final). People didn’t expect us to do well as Boks because we didn’t have great international experience.

“But they forget we had lots of experience of playing international rugby at provincial level against some of the best players and teams in the world.

“That Transvaal team had learned a lot and we learnt how to win and how to close games down against quality opposition.

“And when you infused the core of that Transvaal team with the likes of Andre Joubert‚ Mark Andrews‚ Os du Randt‚ Joost van der Westhuizen and Joel Stransky at the Springboks‚ we always had a shot at the World Cup title.

“That started with Transvaal in 1993 because we had those skills of being able to close a game down in the final 10 minutes to get over the line‚ or ramp it up in the last 10 minutes to win the game. That comes from experience.”

Chance for Bok rookies to rule the roost against France

Allister Coetzee's reign as Springbok coach has been as flaky as a croissant and the three-test series against France won't necessarily solidify his ...
Sport
4 years ago

Amor Vittone has shared a tribute video of Joost van der Westhuizen on the day of his memorial in Pretoria."Personally - Joost gave me the greatest ...
TshisaLIVE
4 years ago

Several of the late Joost van der Westhuizen’s 1995 World Cup winning teammates will act as pall-bearers at his memorial service in Pretoria on ...
Sport
4 years ago