Will Lions unravel in post-Ackermann era? 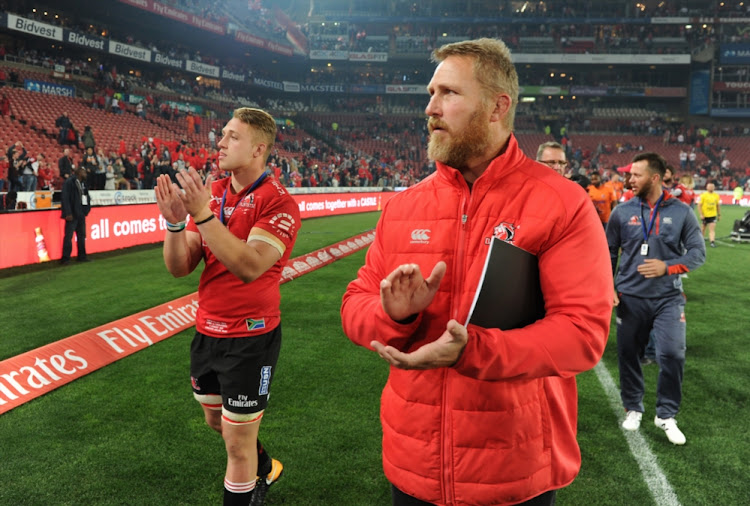 Ruan Ackermann and coach Johan Ackermann of Lions waving to the crowds after loosing during the Super Rugby Final match between Emirates Lions and Crusaders at Emirates Airline Park on August 05, 2017 in Johannesburg, South Africa.
Image: Gallo Images

Is the project that coach Johan Ackermann undertook over the past four seasons at the Lions starting to unravel now that he is moving on to Gloucester in England’s Premier League?

The Sharks on Sunday confirmed that Lions hooker Akker van der Merwe would be joining them while unconfirmed reports claim that looseforward Ruan Ackermann will join his father at Gloucester.

Van der Merwe‚ 26‚ will join the Durban-based team on a two-year deal and becomes available with immediate effect.

He was set to start training in Durban on Monday as they prepare for their Currie Cup encounter against the Blue Bulls this Wednesday.

Van der Merwe is the Lions’ second choice hooker and was set to play a pivotal role in their Currie Cup campaign with first choice Malcolm Marx on Springbok duty.

Losing Ackermann junior would also be a huge blow to squad depth as he has been an integral part of the Lions’ last two Super Rugby campaigns that have seen them reach the final in consecutive seasons.

The Lions fell short in Super Rugby’s showpiece at the weekend‚ losing 25-17 to the Crusaders at a packed Ellis Park.

After being reduced to 14 men late in the first half when flank Kwagga Smith was red-carded‚ the Lions battled manfully until the end‚ but the Crusaders won their eighth title and first in nine years.

Last month Lions chief executive Rudolf Straeuli moved to calm reports of significant players losses in the post-Ackermann era by producing a long list of players who had committed their immediate future to the union.

The list did not specify length of contracts though and Straeuli declined to comment about the details of the contracts as he was still finalising some of them.

Interestingly‚ Ackermann junior was one of the players on the list yet it now appears he is leaving.

Johan Ackermann’s assistant Swys de Bruin was appointed as his successor on July 11‚ so at least there is continuity on that front while the Golden Lions Rugby Union (GLRU) have also improved their junior structures.

The under-18 Craven Week team has featured in the last two ‘finals’ at the national tournament while their under-19 and under-21 teams won the national championship in 2016.

Ackermann has also laid strong foundations at senior level and a few player losses should not be enough to break down the structure he has built.

"To think where we were in 2014 after a lot of guys left the union and we got together as a new group‚ to where we are now‚ is special‚" Ackermann said after Saturday’s Super Rugby final.

"Courtnall Skosan‚ Robbie Coetzee‚ Franco Mostert‚ Warwick Tecklenburg‚ Schalk van der Merwe‚ Willie Britz and others got onto the plane for the first time on tour and 24 of the 26 guys were going to Australasia for the first time.

"That growth of the team‚ now we’ve got 11 or 12 Springboks‚ is a highlight for me because we all coach to get the players to the highest position they can be."

Blue Bulls and Sharks close in on Free State

The Blue Bulls‚ Sharks and Western Province all closed up on the Free State Cheetahs at the top of the Currie Cup standings after recording third ...
Sport
4 years ago

“We create opportunities to create history.”
Sport
4 years ago

'Pawn Stars SA' team know exactly how to sell themselves