Springboks limber up to face Argentina 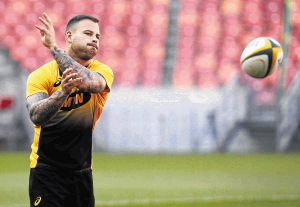 Springbok assistant coach Johann van Graan is predicting a thriller against Argentina, saying most games in the Rugby Championship are decided by only 10 points.

"We have a lot of respect for the Argentinian team,'' he said.

"Rugby Championship games are mostly 10 points either way. So we must take our chances and put a few points on the board.

"Our past few Tests against them have been titanic struggles.

"They always have a good scrum and they are also a good mauling team. Possibly one of their biggest strengths is their breakdown work.

"They have fantastic ball stealers and carriers on both attack and defence. It will be a big challenge for us but one that we are looking forward to."

Van Graan said the decision to arrive in Port Elizabeth two weeks ahead of the Test had already reaped rewards.

"We had a good week here in Port Elizabeth last week and everybody got into the same boat and into the Springbok way."