Lions beef up for WP 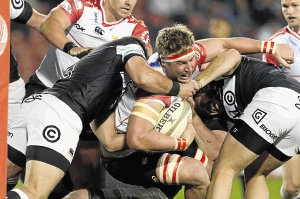 BY HOOK OR BY CROOK: Golden Lions lock Robert Kruger is tackled by two Sharks players in the Currie Cup match played at Ellis Park on Saturday. The Sharks ran in six tries and a penalty try to win the match 47-31.
Image: Sydney Seshibedi/Gallo Images

In dire need of inspiration, the Lions have called on some of their Super Rugby regulars to help restore a Currie Cup campaign teetering on the brink. The Lions, sitting sixth on nine points, travel to Newlands on Saturday to take on Western Province, who are on 11 points.

Regular loosehead prop Jacques van Rooyen has been called up as tighthead and captain in the absence of Ruan Dreyer, who was called up to the Springbok squad this week. Ryan Kankowski, who was stand-in captain of late, is out with a groin injury.

The man who did duty at tighthead last week, Johannes Jonker, drops to the bench.

In the second row Andries Ferreira will bring more grunt, while in-form centre Harold Vorster gets to wear the No13 jersey next to Rohan Janse van Rensburg.

Kankowski makes way for Fabian Booysen, who moves to No8 from flank.

Kankowski is not the only casualty from last week. No9 Dillon Smit, who provided much of their first-half spark last Saturday, faces a lengthy lay-off with a broken ankle.

The rangy Marco Jansen van Vuuren comes in for Smit. Utility forward Robert Kruger, who is struggling with bronchitis, has been earmarked to do duty on the side of the scrum. He has until Thursday to prove his fitness.

At the start of the week, the Lions perhaps anticipated more changes but they will have hooker Robbie Coetzee and Janse van Rensburg available for the clash.

Coetzee kicked Jacques Vermeulen in the face last weekend and was red-carded for the indiscretion. A disciplinary hearing, however, found that his actions were not deliberate.

Although head coach Swys de Bruin has bolstered his squad, his options are limited after losing seven players to national duty and defections to the north during the Currie Cup.