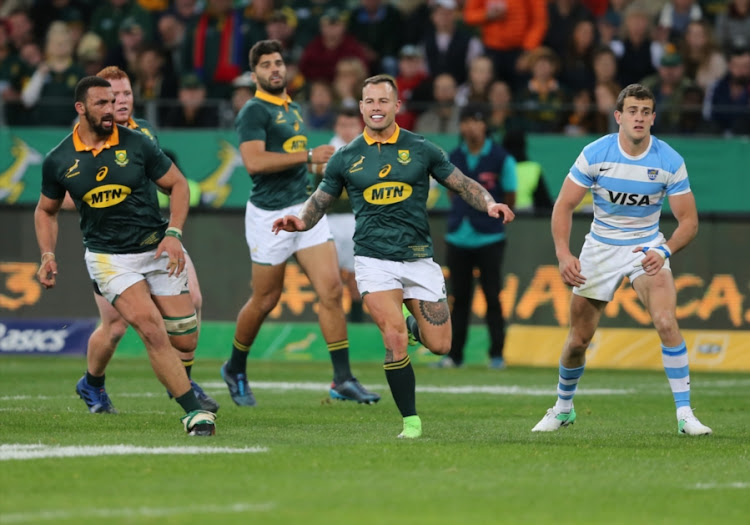 The Springboks find themselves on top of the Rugby Championship standings after two rounds‚ which is such a rarity that they haven’t been there since the Tri-Nations in 2009.

After back-to-back wins over Argentina‚ the Boks have amassed nine log points and edge the All Blacks on points’ difference a third of the way through the 2017 tournament.

Of course‚ they still have to play the All Blacks and Wallabies twice‚ so reading too much into log position is a futile exercise for the moment.

But after five wins in a row in 2017‚ one more than they achieved during the entire 2016 campaign‚ they are seemingly on an upward curve.

Starting from such a dismal base though‚ it’s hard to know just yet whether the curve’s trajectory will flatten out or plummet in the coming six weeks.

If we’re only looking at results then the Boks are unquestionably better.

But are they also better in terms of performance after playing three home games against a weak France and two Tests against a Pumas team clearly in decline?

The Boks can only play the opposition before them and with four of the five wins in excess of 20 points and another 18-point winning margin in Argentina‚ by that measurement‚ they are performing well above average.

In other key performance areas the Boks are also showing good signs‚ although the quality of their opposition has to be taken into account.

One area that has been noticeable is a clear tactical shift to return to a kicking-based game.

So far in the Rugby Championship the Boks have made the most kicks form hand (47) and gained the most kicking metres (1608)‚ which is over 1000 metres more than the All Blacks.

Unsurprisingly the Boks have won the most lineouts (23) in the tournament‚ a result of the Pumas also kicking for 1320 metres.

Both sides have looked to play a territory-based game with the Boks winning that battle.

Because of their heavy kicking game the Boks have made the fewest ball carries (224) and therefore the fewest handling errors (39) and tackles (268). They are looking for more set pieces because the scrum and the lineout are so dominant.

The Boks’ scrum has been particularly emphatic against the Pumas – no minor feat against a country where players learn to scrum before they learn to pass.

The Boks have only conceded one scrum penalty while their direct opponents conceded five over the two matches. That again underlines how much pressure the Pumas were under at the set piece.

Tougher Tests in Perth and Albany in the coming three weeks are on the horizon for the Boks‚ but compared to last year there is room for optimism.

The Boks are tactically smarter‚ playing to their strengths and trying to eliminate their weaknesses.

Coach Allister Coetzee has obviously taken the advice of consultant Brendan Venter to heart and opened his mind to assistance because this is a different team to 10 months ago when they were being humiliated in Florence and Cardiff.

There is clarity of thought and process‚ which has been allowed to grow against two weak international teams in France and Argentina.

Now we’ll get to see if that growth can be sustained against better opposition.