Southern Kings coach says the only way is upwards 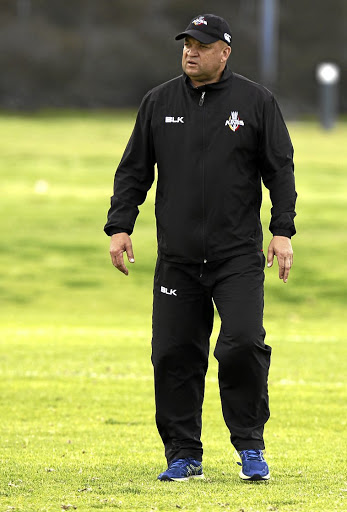 Southern Kings head coach Deon Davids prepares his side for their Pro14 clash against Scarlets in Wales on Saturday.
Image: Michael Sheehan/Gallo Images

Southern Kings head coach Deon Davids says one of the positives of starting against Pro14 champions Scarlets is that things can hardly get worse going forward.

That was Davids' philosophical take on what promises to be a fiery baptism against a star-studded Scarlets outfit in Llanelli in Wales on Saturday.

The Southern Kings flew to the UK yesterday for a two-week tour that includes a match against Connacht in Ireland on September 9.

"I think there are pros and cons about starting against the champions," coach Davids said.

"The advantage is that possibly it can't get worse than the first game. So, we are looking forward to testing ourselves against the best team.

"There is enough talent in this Kings team and it is a question of being patient.

"We must not be afraid to show from the start that we are not scared to be in the competition.

"Scarlets are the champion side. They have got strength all over in their team and they are a side who like to play with ball in hand.

"They are quite dangerous if you concede turnovers against them and they have got a good set-piece.

"It is going to be an 80-minute battle. We are in this now and we are excited to go there and see where we are.

"The Kings will go into this game confident of our ability and we will see this as a good learning exercise and base from where we can start and continue our campaign going forward," Davids said.

After losing most of their star players after their spell in Super Rugby, the Kings have once again embarked on a rebuilding phase.

The Southern Kings named an inexperienced squad to be captained by hooker Michael Willemse for their opening two weeks of PRO 14 rugby.
Sport
4 years ago

They won a record six Super Rugby matches this year and Davids wants his players to deliver a similar brand of attacking rugby.

This time, though, they will be without inspirational captain Lionel Cronje, who is now plying his trade in Japan.

Davids has turned to hooker Michael Willemse to lead the side and rally the troops for what will be a testing campaign.