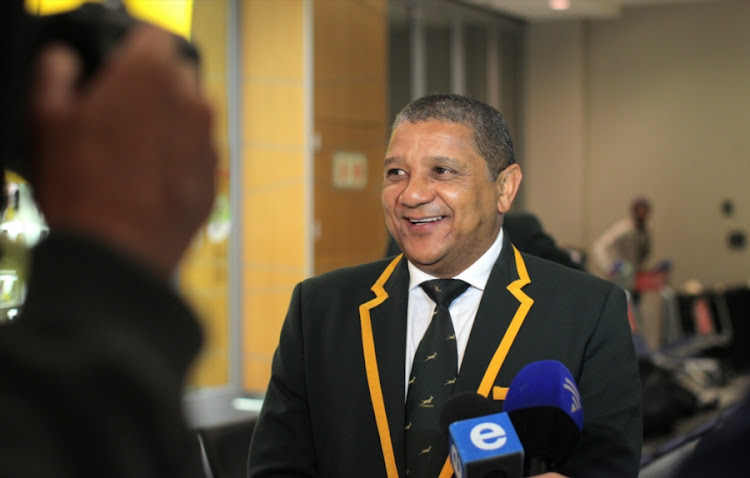 Springbok coach Allister Coetzee has a strut in his step and a twinkle in his eye again after a string of positive results have seen him fight back from the brink of being sacked‚ to being the only undefeated tier one Test coach in 2017.

Even the mighty All Blacks and the resurgent England have lost Tests this year.

The Boks also won their first away game under Coetzee by beating Argentina 41-23 in Salta last weekend and are now top of the Rugby Championship standings after two rounds.

The Boks scored five tries in Salta‚ which was the first time outside of the 2015 World Cup that they’ve scored more than four tries away from home.

Springbok captain Eben Etzebeth is relishing the leadership role that was thrust upon him earlier this year when Warren Whiteley was ruled out ...
Sport
4 years ago

They’ve also only conceded eight tries in five Tests this year. Life couldn’t be better for Coetzee and his team.

But Coetzee also knows that it will become tougher in the coming weeks as the Boks take on the Wallabies in Perth and the All Blacks in Albany on the outskirts of Auckland next month.

Australia have just lost the Bledisloe Cup to New Zealand for the 15th straight year after 54-34 and 35-29 defeats in Sydney and Dunedin respectively over the past two weeks.

But they showed glimpses of being a dangerous side and scored eight tries against the All Blacks over the two matches.

"It's a different beast waiting in Australia‚” Coetzee said.

“It's always tough going down to Australia. They're hitting form so don't look at Super Rugby and how their teams did there as an indication.

Flyhalf Handré Pollard was a surprise inclusion in the Springbok squad for the Australasian leg of the Rugby Championship named by coach Allister ...
Sport
4 years ago

"The [Wallaby] team that played against the All Blacks is really improving.

"They made a couple of mistakes in the first game and were punished and you saw how they put the All Blacks under pressure in the second game."

Having collected nine log points from a possible 10 in their two matches against the Pumas‚ Coetzee is satisfied but still pragmatic.

They are only a third of the way through the tournament and it will become harder.

“We are looking at the Rugby Championship as a challenge divided into three separate phases‚” said Coetzee.

“Phase one has just been completed‚ now we are looking ahead to the second phase‚ which is the Australasian leg‚ then obviously later in the competition we will have the home leg where we host New Zealand and Australia.

“We were very happy with the way things went in the matches against Argentina.

"When it comes to how well we went in Salta‚ it started with the change in our operational plan.

Cheetahs director of rugby and current Springbok attack coach Franco Smith believes that South Africans will be pleasantly surprised by the standard ...
Sport
4 years ago

"The decision to go across to Argentina on our off day‚ thus giving us two full days to work on our game in South Africa at the start of the week first‚ paid off.

“You could feel on Friday that our focus was there and that we were fresh and well rested.

"By Saturday we were ready to play and I must commend the medical team and the physio staff. There were a lot of people who contributed to a good result on Saturday.

“We wanted the away result and we got that in Salta‚ now there is another challenge. One by one we have ticked off the little boxes in terms of what we needed to work on.

“Our scrumming has been good‚ our mauling has improved and our defence was again excellent in Salta. We feel comfortable with the progress we have made.”