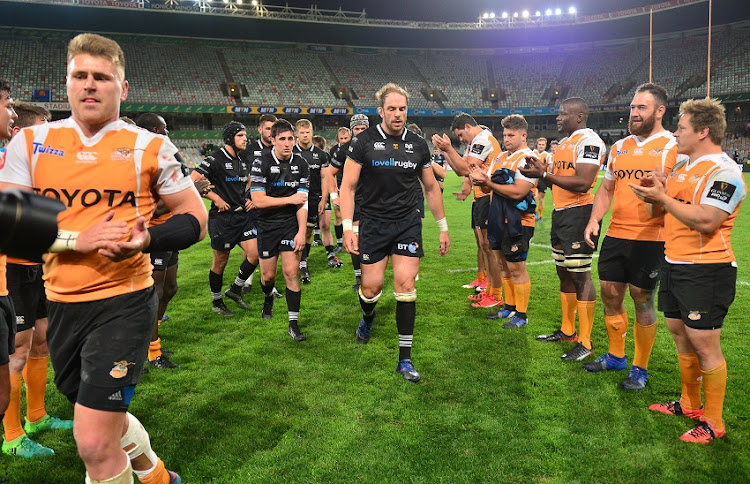 Alun Wyn Jones of the Ospreys lead his teammates after game during the 2017 Guinness PRO14 game between the Cheetahs and Ospreys at Toyota Stadium on 29 September 2017.
Image: Samuel Shivambu/BackpagePix

With the Currie Cup nearing the business end‚ the Cheetahs and the Blue Bulls have the most to lose from this set of matches this weekend.

The Cheetahs have been well served by their fast start to the tournament as those points earned while they had a full strength side have allowed them to coast along in the tournament.

They are currently third on the log with 30 points and host the Bulls‚ who are sixth with 22 points.

The Bulls have to win and hope that some favours are done by the Griquas against the Pumas in Mbombela on Saturday while Western Province have to see off the Golden Lions at Ellis Park on Sunday afternoon.

Blue Bulls head coach John Mitchell harbours hopes of making the play-offs but understands it’s going to be difficult for them with their fate not in their hands.

It was good of him to keep faith in the side that narrowly lost against Western Province at home on Sunday.

The Blue Bulls are slight favourites against a Free State Cheetahs side who were hammered in Kimberley.

“I want the players to step up defensively and the players to be centred collectively around our defence. It’s been our limitation the whole year and to me there’s a great future in how we defend‚” Mitchell said.

“I’m not that big on focussing on the opposition but I have been focussing on their trends and their patterns. In terms of the scoreboards that exist‚ they probably go a little bit deeper than that to understand what is an opportunity and what's a threat.”

Cheetahs Currie Cup coach Daan Human made five changes from the side that caught a serious hiding against the Griquas away.

There’s the necessity to win for the Cheetahs to ensure they have a home semifinal in their topsy-turvy Currie Cup defence to at least have a shot of defending their hard-earned silverware.

The Cheetahs have only won one of their last four match‚ a terrible return even though they have a young side.

The Golden Lions and Western Province will be naming their teams on Friday while Pumas‚ who had a bye last week‚ have one change from the side that lost to the Free State Cheetahs two weeks ago.