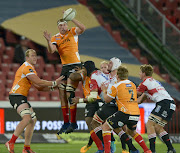 The Golden Lions were as full of intent as they were of imprecision as they secured a Currie Cup semi-final spot against Western Province at Newlands next weekend.

In the other semi-final the Sharks will host the Blue Bulls in Durban. For the first 70 minutes of this match the Lions made heavy weather of subduing the gallant visitors.

A try fest was expected here but neither side could fully assert themselves on the other’s defence in the first hour. The Cheetahs had the perfect alibi. They hardly saw oval object of desire but the Lions, despite their over familiarity with the ball, frittered away positions of promise.

To be fair, they had four tryline breaches overruled by either the referee or the television match official.

On the whole however, they weren’t as clinical as they can be and allowed the Cheetahs to remain competitive in a match that should have been killed off as a contest before the break.

It was only when Courtnall Skosan raced into the clear with 10 minutes to go that they put the matter to rest.

The hosts had the lions’ share of possession and territory in the first half. In fact, there were times when it seemed they didn’t know what to do with the ball.

They let the Cheetahs off the leash far too often when they were hot on the attack and in one glaring example a stray pass found the grateful hands of perennially speeding Cheetah Makazole Mapimpi.

The converted try, apart from serving a timely notice of the Cheetahs’ potency when they are allowed space, also brought the Cheetahs, despite finding themselves on the backfoot for the bulk of the half, within three points of the hosts.

Eventually however the Lions’ dominance was rewarded. They weren’t short of endeavour through the wonderfully intuitive Harold Vorster, the positional awareness of Ross Cronje and the wrecking ball exploits of Cyle Brink.

Add to that Kwagga Smith somehow finding space in what appeared to be congested traffic, while Andries Ferreira proved a reliable source of line-out ball.

The educated boot of Jaco van der Walt also helped but he also managed to pull all the right strings at flyhalf.

To their credit the Cheetahs, once they turned for inspiration to their bench played with verve, although not always with vision. Replacement prop Ox Nche made quite an impact as ball carrier off the bench but the Lions by then thanks to the introduction of Dylan Smith and Malcolm Marx held the whip hand in the scrums.

The game was much looser in the second half which initially suited the Cheetahs, but it was the Lions who decisively turned the screw in the closing minutes.