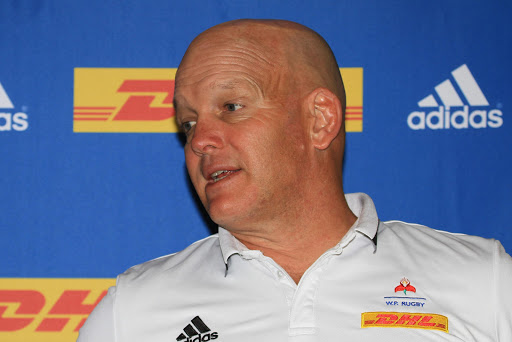 Western province coach John Dobson revealed that he and his charges spent the week in the build-up to the game ragging flyhalf Rob du Preez about coming up against his twin brothers in the final round of the regular Currie Cup season.

WP needed to win with a bonus point to claim a home semi-final‚ which they duly did with a 31-20 victory over the Sharks at the weekend.

The visitors overturned a 13-3 halftime deficit with Rob du Preez producing a superb performance where he scored two tries‚ landed four conversions and kicked a penalty for a 21-point haul.

It was an eye-catching display from the flyhalf‚ who has been linked to a move back to Durban at the end of the season where he will join up with his father (Robert senior – Sharks coach) and twin brothers Jean-Luc and Daniel.

“We gave Rob a hard time in the build-up to this game‚” Dobson said.

“The guys were asking him if he was going to ‘sort out his sisters today’ because we thought Jean-Luc and Daniel were both playing.

“Look‚ Rob had a lot riding on this game if it is true that he is returning to Durban because he is playing for a place in the Sharks team.

“He is also a candidate for the Springboks’ end-of-year tour so he had a personal score to settle and the referee actually told him to calm down after scoring his first try.

“We were under a lot of pressure for a home semi-final. We are probably one of the better teams in the tournament in terms of talent‚ so for us not to have secured a home semi-final would have been an underperformance. That’s why we were so desperate.

“What makes it tough on teams like us is that we will face a Lions team full of returning Springboks.”

It also says a lot about the state of the Currie Cup that the Blue Bulls made the semi-finals despite losing 60% of their matches while the Golden Lions lost half their games and still finished third.

The Sharks have been the form team of the tournament‚ recording 10 wins in a row‚ which were bookended by defeats in round one and round 12.

The Golden Lions have a trip to Cape Town to take on Western Province in the other semi and the Cape side won nearly 60% of their matches (seven out 12).

The Currie Cup is a tournament structure that rewards mediocrity.

With seven teams in the competition‚ only three are eliminated after a laborious 12-match pool phase.

The tournament would be better served if the top two advanced directly to a final.

But play-offs mean money and an extra game attracting 30000 plus fans at Newlands and King’s Park‚ as is the case this year‚ is vital income to struggling unions.

It wouldn’t do the tournament’s integrity much good if the Bulls went on to win it‚ but it’s a possibility.

But that is not their concern and right now the four remaining teams can only focus on the task at hand.

The integrity and structure of the tournament is a matter for the suits.