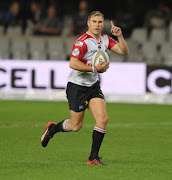 The Golden Lions aren’t about to repeat the mistakes that tripped them up in last year’s Currie Cup semifinals.

In an anti-climatic dropping of the curtain on their season the Cheetahs then put 50 points on them in but Lions flyhalf Jaco van der Walt believes they are better for it going into this weekend’s semi against Western Province at Newlands.

So what have they learnt from last year?

“To remain calm‚” Van der Walt said matter of factly. “We were extremely overeager. We were hurried. We weren’t relaxed.

“We know what it’s like to play in a semifinal and a final. We are a lot calmer. The guys have picked up that experience. We’ll stay with the basics and follow the processes‚” he promised.

Van der Walt‚ who has been part of the Lions setup since under-13‚ then mentioned what has become a recurring theme at the franchise.

“We’ve played for each other through Super Rugby and the Currie Cup. We are brothers.”

It helped them win four of their last five matches and lifted them from the bottom of the points table into the semis.

“I believe the momentum is with us. Winning brings confidence. We have to keep doing what we have been doing‚” said Van der Walt‚ perhaps suggesting the Lions will not deviate from the ball in hand approach that has helped them run opponents ragged.

His steady displays‚ whether at flyhalf or fullback have helped in the Lions’ turnaround. It is at flyhalf‚ however‚ where his impact has been more keenly felt. His incisive play and educated boot have proved valuable allies to the team’s cause.

“I’m satisfied. After my injuries my confidence was a little low. The more you play the more it improves. Last week also helped put me in a positive space‚” he said.

This week‚ more than ever however‚ he needs to hold his nerve. Van der Walt will need no reminding how his erstwhile colleague Marnitz Boshoff fluffed his well rehearsed lines in the 2014 Currie Cup final at Newlands. It cost the Lions dearly.

“I’ll just take it as another game‚” he said about this week’s semi. “You simply have to follow your processes. There will be more pressure but nothing changes.

“I believe the more pressure you operate under the better you’ll get. It’s about how you handle the pressure. I haven’t had the pressure that I thought I’d get. I’m sure it will come.

“I will embrace it because it will compel me to deliver my best.”