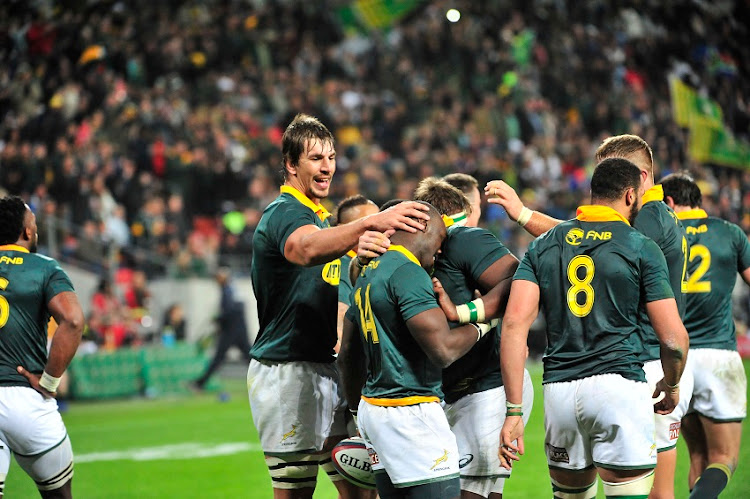 A dozen contracted Springboks will gather for fitness assessments and tactical training in Cape Town next week as part of the squad’s preparation for the year-end tour to Ireland‚ Europe and Britain in November.

Led by Bok captain Eben Etzebeth‚ the 12 players will gather for four days in the Mother City. Players involved in the Currie Cup semifinals and final‚ or on duty with clubs in Japan and Britain‚ were not considered.

The purpose of the camp is to give Springbok management firsthand opportunity to assess the medical‚ conditioning and fitness status of the selected group as the Springboks step up their preparations for the tour.

The small group will work under the supervision of the Springbok medical and conditioning team‚ while the coaches will also put them through their paces with skills training and tactical planning sessions.

Springbok coach Allister Coetzee said the camp forms an important part of their preparation for the end of year tour.

“The European tour will provide us with different challenges and we will therefore use the four days to spend some time on our fundamentals‚ continued rehabilitation and conditioning of this group of players‚” said Coetzee.

“Our management will be working hard during this period to finalise our detailed planning for the upcoming tour‚ and overall it will give us a good indication of the progress of those players who have recovered from injury‚ or those currently battling with niggles.

“They now had proper rest and recovery for almost two weeks and we must make sure they are rugby ready to ensure optimal performance for the challenges awaiting us during the end of the year tour.”

The Springbok squad for the end of year tour will be announced on Sunday‚ October 29 – the day after the Currie Cup final – and will assemble in Johannesburg on Monday‚ October 30.

The following players will attend a four-day training‚ assessment and conditioning camp in Cape Town:

Bok backline is a work in progress

There were plenty of positive signs from the Springboks during the Rugby Championship and they will be buoyed by the fact that they ran the All ...
Sport
4 years ago