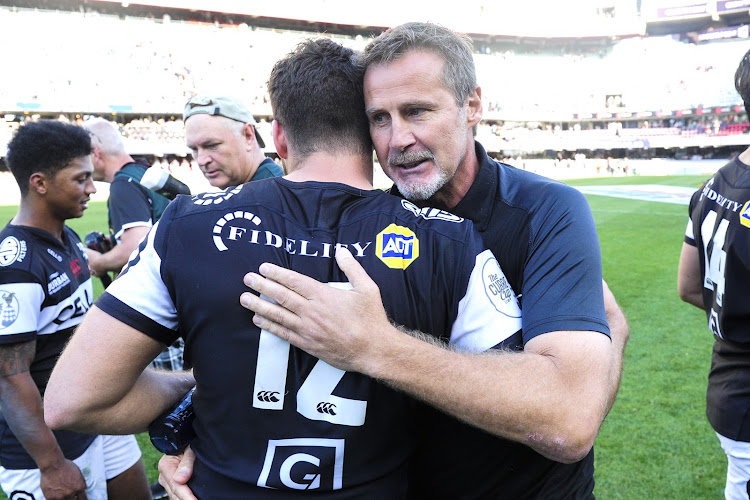 Sharks coach Robert du Preez didn't allow himself a moment to wax lyrical about his team's 37-27 Currie Cup semi-final win over the Blue Bulls‚ saying they have yet to hit their straps.

At the time‚ he didn't know who his final opponents were going to be but it's a thinly-veiled message to Western Province‚ who were successful on their last visit to King's Park and history also has it that the Sharks have a Currie Cup score to settle with Western Province.

Five years ago‚ an unfancied Western Province side coached by Allister Coetzee burgled an unexpected 25-18 Currie Cup final win‚ even though the Sharks more than returned the favour at Newlands the following year.

That 33-19 win remains the last time the Sharks annexed the Currie Cup.

“I don't think we've hit our straps yet and I think we'll put that together next week. However‚ we need to give credit to the Bulls‚ I thought they played very well and they really came to play," said Du Preez.

"In terms of players‚ we're not going to change anything and we need to sort out our exits.

"They weren't great and we really couldn't get any momentum in the second half. We gave away too many penalties and we'll have to be vigilant in that regard‚” Du Preez said.

The second half was a cause for concern for Du Preez‚ especially with the fact they were outscored by the Bulls.

However‚ they had put in all the hard yards in the first half as four tries from Lukhanyo Am‚ Kobus van Wyk‚ Louis Schreuder and Ruan Botha gave them an advantage they didn't relinquish.

Curwin Bosch also embellished his reputation as a big match player despite his issues with taking contact with 17 points from his accomplished boot.

At the end of the day‚ a final between Sharks and Western Province is a fitting finale to what has been a topsy-turvy tournament.

The Sharks were the only side to display consistency as their 10-match unbeaten run in the round-robin stage gave them the inside to the big game.

Du Preez said they were happy to get the home final and to make the most of home advantage.

However‚ there was the sad part of Springbok prospect S'bu Nkosi crying off with what Du Preez described as a dislocated elbow.

“A home final means everything because that's what you play for. You want to play in front of your fans in a final at home.

"It's going to be a new chapter for a whole bunch of guys but a final is a final. We haven't won anything yet and we've got nothing to lose. We're really going to play to win‚” Du Preez said.

The Springboks’ back division has struggled but help is at hand

Here are three players who could improve that situation during next month’s tour to Ireland, France, Italy and Wales
Sport
4 years ago

Sharks home in on final

With 10 consecutive round-robin victories, odds were against the Bulls from beginning
Sport
4 years ago

Southern Kings head coach Deon Davids is accustomed to being rugby's salvage man but there is only so much he can do.
Sport
4 years ago

Hungry Aussies get a taste of victory at last

Australia produced a performance of huge character to beat New Zealand 23-18 and secure their first victory over the world champions in eight tests ...
Sport
4 years ago