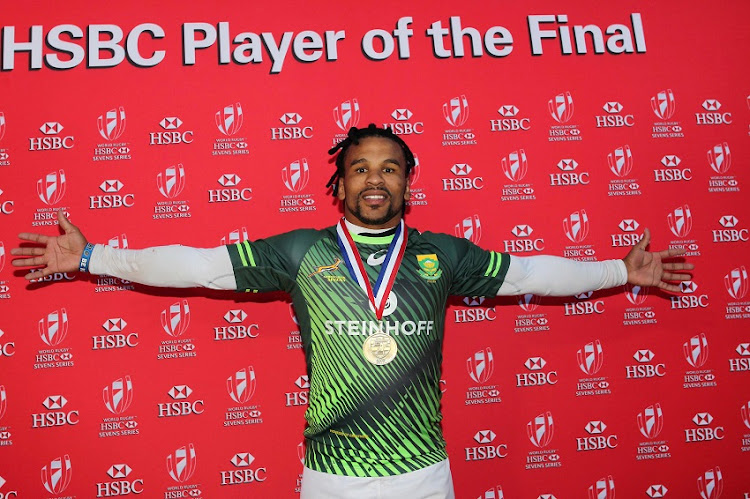 Blitzbok playmaker Rosko Specman is in line to emulate teammates Seabelo Senatla‚ Werner Kok and Cecil Afrika after being nominated for the Sevens World Player of the Year award.

Specman‚ 28‚ was in superb form during the 2016/17 HSBC World Sevens Series scoring 20 tries in 48 matches as SA won the title for a second time and could become the fourth SA man to win the award.

On their way to the title SA won five of the 10 legs on the World Series – in Dubai‚ Wellington‚ Sydney‚ Las Vegas and Paris – and Specman played in each of those tournaments.

He was also named Player of the Tournament at the Las Vegas Sevens.

The announcement of the winner takes place at the World Rugby Awards at the Salle des Etoiles in Monte Carlo on 26 November.

The Blitzbok speedster was nominated alongside Perry Baker (USA) and Jerry Tuwai (Fiji).

“Credit must go to the team‚” Specman said.

“We all work together to make it tick and the individual performances are only possible because of the foundations laid by the team as a whole first.

“It is a big honour to be nominated and I am humbled by this.

"Thank you to all involved and I’d also like to congratulate Perry and Jerry‚ they both played incredibly well during the season‚” the flyer said.

Blitzbok coach Neil Powell praised Specman: “It is always a team effort and knowing how much Rosko contributes in that system‚ his nomination is just reward.

“He had an unbelievable season and always delivered when we needed him to.

"It is no co-incidence that he was part of all five tournament wins last season‚ something in itself a magnificent performance.

“The World Series highlights the amazing athletic abilities of these guys and Perry and Jerry are certainly two of the most exciting players on the circuit‚ with both excelling and they are worthwhile contenders.”